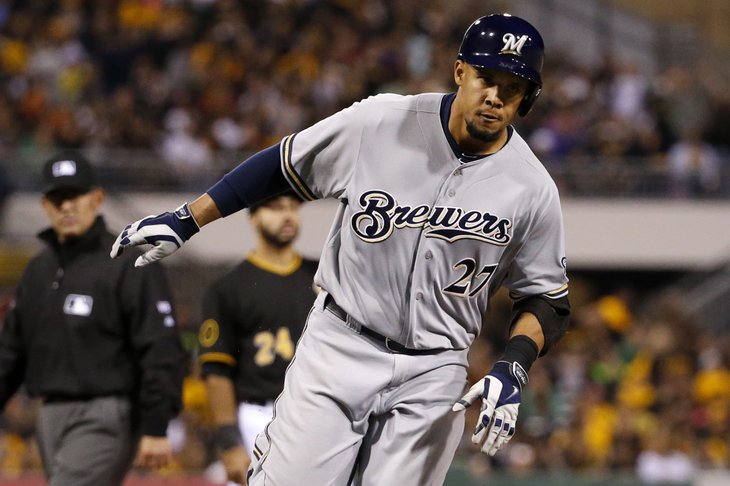 Tonight’s game between the Pittsburgh Pirates and Milwaukee Brewers was anything but ordinary.  It featured a trade, a slew of errors, and even the defacing of a baseball.  In the end, it all resulted in a 5-3 loss for the Pirates, evening the four game series at a game each.

Things couldn’t have started any better for the Bucs.  Starling Marte led off the game by hitting a shallow pop up in the infield, but Mark Reynolds and Aramis Ramirez weren’t able to communicate to call off the baseball, and the ball dropped in, allowing Marte to reach base.  Starling then stole second base and advanced to third on the Brewers’ second error of the inning.  Russell Martin’s ground out to short stop scored the first run of the game, putting the Pirates in front early.

Pittsburgh had a chance to break the game wide open early on.  Martin’s RBI single in the third inning scored Jordy Mercer, who led off the inning with a single.  But after an Andrew McCutchen walk, the bases were loaded with just one out.  Pedro Alvarez struck out and Neil Walker popped out to end the threat, limiting the damage to a 2-0 score.

Milwaukee added a run in the fifth on a solo homerun by Carlos Gomez, and another run in the sixth on an RBI single by Gomez.  Pittsburgh responded in the seventh on an RBI double by McCutchen.  But once again, with runners on base, Pedro was unable to produce, striking out to end the threat.

The Pirates loaded the bases in the bottom of the eighth inning, trailing by two runs.  Walker was hit by a pitch to lead off the inning, and after Josh Harrison smacked a pinch-hit single and Travis Snider forced a walk, Marte popped out to first base, much to the dismay of the PNC Park crowd.

They were also able to bring the tying run to the plate in the ninth, but with two outs and a runner on second, Walker lined out to Mark Reynolds to end the game.

This was a frustrating loss for the Pirates.  They had plenty of opportunities to score runs, and simply weren’t able to come through.  Things started out well for Bucs’ starter Charlie Morton, but he ran into trouble in the middle innings.  He gave up five runs on eight hits with two walks and three strikeouts in six innings of work.  His on-mound opponent, Kyle Lohse, lasted 6.1 innings, giving up three runs (one earned) on four hits.

Prior to tonight’s game, it was announced that the Pirates had acquired first baseman Ike Davis from the New York Mets.  He is expected in Pittsburgh as soon as tomorrow.

After splitting the first pair of games in this series, the Pirates and Brewers will get back at it tomorrow evening at PNC Park.  Matt Garza will start for Milwaukee against Pittsburgh’s Wandy Rodriguez.  First pitch is scheduled for 7:05pm.