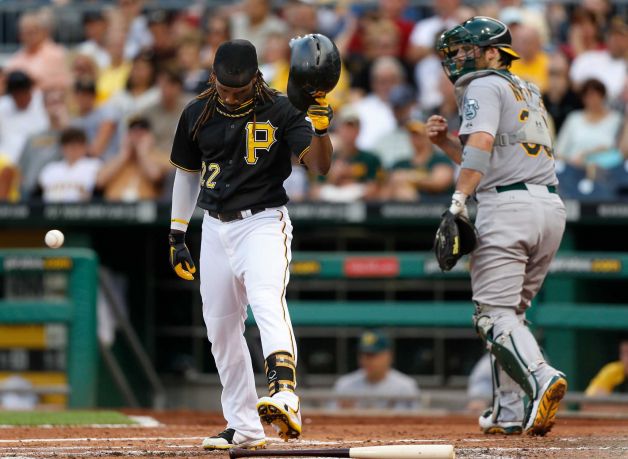 A week ago, the Pittsburgh Pirates were flying high…riding a nine game winning streak and sitting atop the entire league with the best record in all of Major League Baseball.  Flash forward to tonight, and after their 2-1 loss to the Oakland Athletics at PNC Park, and people are starting to worry about the Bucs…and rightfully so.

Jeff Locke, days after being named to the N.L. All Star team, started tonight for the Bucs, and, as has been the case throughout the season, put forth a solid effort, going deep into the game and keeping the opposing offense in check.  Unfortunately, the Athletics did make him pay for a few mistakes, and, with the help of a few questionable calls by the umpires, Locke and the Bucs fell into a small hole that the stagnant offense couldn’t save.

Locke pitched seven innings, giving up two runs on three hits and three walks, losing his second game of the season (8-2).  Justin Wilson pitched two innings of hitless relief.  But the story of the night was the Pirates offense…or lack thereof…especially when they needed it the most.

One of the biggest stories of this season so far for Pittsburgh, in addition to the starting pitching and the bullpen, has been the timely hitting.  Tonight, the Bucs had a few golden opportunities to take control of the game against Oakland starter Bartolo Colon.  But the Pirates couldn’t cash in, and Colon earned his twelfth win of the season (12-3).

As a team, the Pirates had nine hits and left a total of 20 runners on base.  The lone run came on an infield single by Jose Tabata in the seventh inning, scoring Clint Barmes.  Both Tabata and Barmes had two hits, as did Pedro Alvarez.  Andrew McCutchen, Garrett Jones, and Travis Snider added a hit each in a losing effort.

This was a game that the Pirates really needed to win to get back on the winning side of things.  This is officially a losing streak, and things need to turn around quickly.  The Bucs only have five games remaining before the All Star break, and they need to end what has been an amazing first half of the season on a positive note.

The Pirates and Athletics meet back up again tomorrow night at PNC Park.  Gerrit Cole will make the start for the Bucs, with the first pitch slated for 7:05pm.