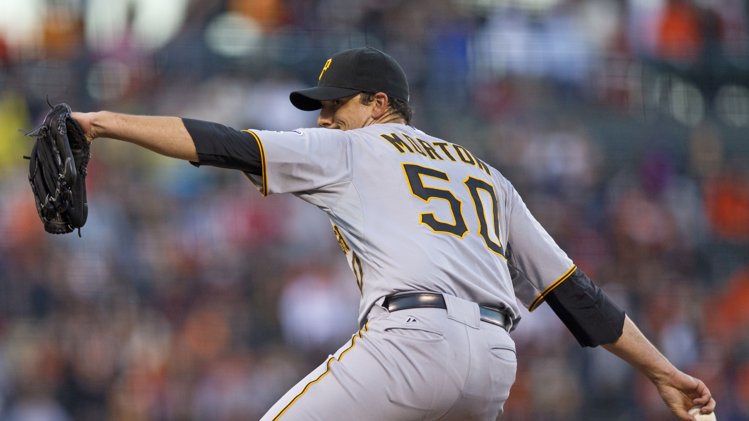 It’s been an impressive west coast road trip thus far for the Pittsburgh Pirates, who entered tonight’s game against the San Francisco Giants having won three of their first four games this week.  In game two of the series tonight, Charlie Morton squared off against Madison Bumgarner.  While post pitchers went deep into the game, Morton was more efficient down the stretch, keeping the Giants’ offense in check throughout the night as the Bucs edged the home team, 3-1.

Morton was solid tonight for Pittsburgh, giving up just one run on seven hits in 7.2 innings of work.  Tony Watson needed only three pitches to get the final out of the eighth, and Mark Melancon came in and shut things down in the ninth, sealing the victory for the Pirates.

The Pirates took the lead in the seventh inning, finally getting some runs across the plate against Bumgarner.  Gaby Sanchez led off the inning with a single to center field, and advanced to second on a single by Josh Harrison.  Neil Walker sacrificed Harrison and Sanchez to second and third to set the table with two runners in scoring position and only one out.  Clint Barmes belted a three-run homerun to left field to empty the bases, giving the Bucs a 3-1 lead.

Tonight was another example of a game the Bucs could have very easily lost, but they did all the things you need to do in order to win.  They got a great performance from their starter, solid (and brief) work from their bullpen, and timely hitting.  Barmes is as unlikely as anyone to hit a three run homerun, but that’s the way things are going right now for this team.

While the Pirates are enjoying success out west thus far, they aren’t adding any separation between themselves and the St. Louis Cardinals in the N.L. Central division race, who continue to win consistently as well.  The Cincinnati Reds lost today, falling another game behind the Bucs.

Francisco Liriano will face off against Tim Lincecum tomorrow night in the third game of the series between the Pirates and Giants.