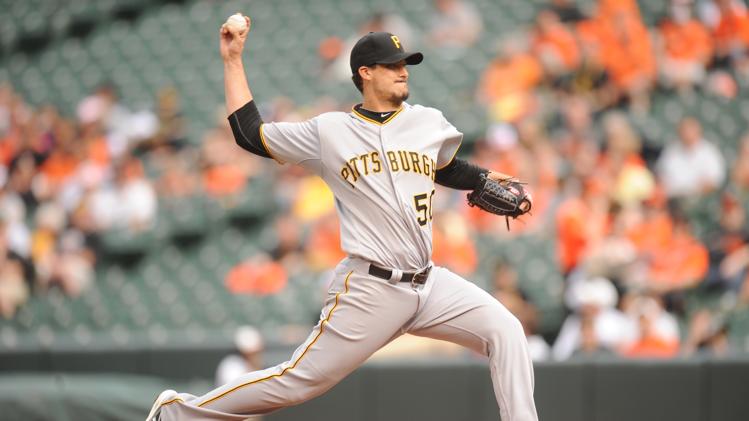 After three days off, the Pittsburgh Pirates returned to action this afternoon for a doubleheader against the Baltimore Orioles.  Charlie Morton started the first game of the day, trying to earn his first victory of the season while helping the Pirates get back to the winning side of baseball.

Morton pitched well through the first four innings of today’s game.  He was getting a lot of swing and misses, plenty of ground balls, and was working efficiently.  Then a 21 minute rain delay in between the fourth and fifth innings happened…and Morton fell apart.

Delmon Young led off the fifth inning with a single, and advanced to second on a walk to Steve Clevenger.  J.J. Hardy laid down a bunt in an attempt to advance the runners, but ended up safe at first on Pedro Alvarez’s throwing error, loading the bases with no outs.  Steve Pearce singled home Young, and Ryan Flaherty singled home Clevenger and Hardy to put the Orioles out to a 3-1 lead.

Baltimore added another run in the sixth inning, which would knock Morton from the game.  Clevenger reached first on Neil Walker’s fielding error with one out in the sixth, and eventually scored on another RBI single by Pearce.

Morton was pulled, giving up four runs (two earned) on seven hits with two walks and four strikeouts in 5.1 innings of work.  Jeanmar Gomez relieved Morton, pitching the final 2.2 innings of game, giving up a run on two hits.

The Pirates scored the first run of the game on Alvarez’s RBI single in the third inning, scoring Jose Tabata.  As a team, the Bucs totaled nine hits, but weren’t able to sustain any type of a rally to put runs on the board.  Alvarez led the team with three hits, while Andrew McCutchen reached base four times, including two hits.  The Bucs were 1-14 with runners in scoring position.

This was not what Pirates fans were hoping for after an extended break from baseball.  While Morton ran into trouble in this game, the O’s only scored five runs…that shouldn’t be a death sentence.  The Bucs have lost 14 of 18 games, and they are spiraling downward extremely quickly.

The two teams will get back at it tonight in the second and final game of this short series.  After a very difficult game this afternoon, it is even more imperative that the Bucs find a way to win this game tonight.  Brandon Cumpton will make his second start of the season, hoping to earn his first victory.