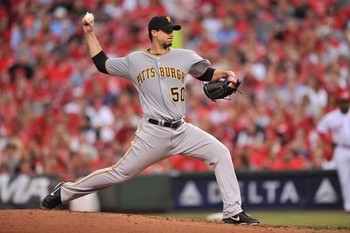 If we’ve learned anything over the past couple of seasons, starting pitching is the key to the success of the Pittsburgh Pirates.  And currently, while their starting pitching rotation is in flux, they are still getting some solid performances by those on the hill.  Charlie Morton, making his second start of the season, held the Cincinnati Reds lineup in check, as the Bucs earned the shutout, 4-0, at Great American Ballpark.

Morton gave up just three hits and no walks through 5.1 innings, keeping the Reds hitters guessing throughout his performance.  Tony Watson, Mark Melancon, and Jason Grilli combined to allow just one hit the rest of the way, holding the Red Legs from making any kind of run.

The Bucs got off to a great start offensively against Reds’ starter Mat Latos, Starling Marte led off with a triple, and scored on Russell Martin’s infield single.  Martin later stole second base, and after back to back walks to Garrett Jones and Neil Walker, Latos gave up a bases loaded, two-run single to Pedro Alvarez to left field.  Marte’s RBI single in the seventh inning scored Jordy Mercer and gave the Bucs a four-run cushion.

With the victory tonight, the Bucs recorded their 12th shutout of the season, the most in Major League Baseball.  Unfortunately, they struck out a total of 17 times as a team, but they did enough with the bat to have a comfortable victory for Charlie Morton and the rest of the pitching staff.

Obviously, this was looked upon as a crucial series between two N.L. Central foes, and so far, the teams have played to a stalemate.  Two games remain in this series, and so far, it’s been exactly what we thought it’d be.

The Bucs and Reds will match up again tomorrow night at Great American Ballpark.  Jeff Locke will take the mound for Pittsburgh against Cincy’s Bronson Arroyo.  First pitch is scheduled for 7:10pm.