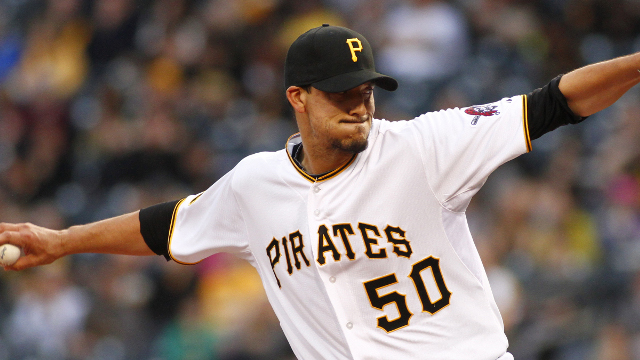 We’ve been hearing all season long about how special Gregory Polanco is going to be for the Pittsburgh Pirates.  Well maybe he already is…

Polanco went 2-4 with a homerun, a double, and two RBIs, while Charlie Morton held the Arizona Diamondbacks in check throughout the night, leading the Pirates to a 3-1 victory at PNC Park.

Morton gave up just one run on five hits with three walks and five strikeouts through six innings, lowering his ERA to 3.30 on the season.  Justin Wilson and Tony Watson each pitched a scoreless inning of relief, setting the table for Mark Melancon, who earned his 16th save of the season.

Offensively, the Pirates did just enough to keep Morton comfortable on the mound.  Polanco and Russell Martin had two hits each, while Jordy Mercer had three hits for the Bucs.  Starling Marte had a hit and two RBIs, while Andrew McCutchen added two hits while knocking in one run.

Polanco led off the bottom of the first inning with a double to deep right field.  Polanco advanced to third on Gerardo Parra’s error in right field, and scored on Marte’s ground out to shortstop.

Polanco drove in two runs in the bottom of the second inning on a two-run homerun to right field, scoring Jordy Mercer from second base.

The Pirates added two more insurance runs in the bottom of the eighth inning.  Marte’s double scored Travis Snider, and McCutchen’s single scored Marte, pushing the lead to 5-1, which would be the final.

This was another huge win for this team who is suddenly hot.  With the victory tonight, the Pirates have clinched another series win…their eighth in their last ten.  They are playing very good baseball right now against some of the more inferior teams in the National League, and they are taking advantage of this lighter part of their schedule.

The Bucs will go for the series sweep of the Diamondbacks tomorrow evening at PNC Park.  Vance Worley will start for Pittsburgh against Brandon McCarthy for Arizona.  First pitch is scheduled for 7:05pm.