Morton Struggles In Debut As Giants Shut Out Pirates 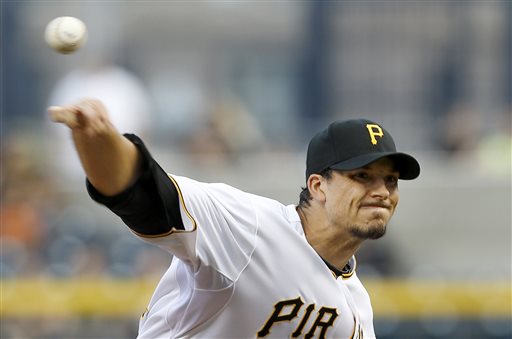 After two exciting nights at PNC Park, the Pittsburgh Pirates turned the ball over to Charlie Morton, who made his regular season debut after returning from Tommy John Surgery last year.  Tonight, the Pirates’ pitching staff struggled, from Morton and all through the bullpen, in a 10-0 blowout loss to the San Francisco Giants.

In his first start of the 2013 season, Morton lasted five innings, giving up four runs (two earned) on seven hits with one walk and five strikeouts.  He struggled from the outset, giving up individual runs in the first and second inning, and after giving up another pair in the fifth, Ground Chuck was finished before the start of the sixth.

Bucs’ reliever Mike Zagurski was awful tonight, giving up five runs on six hits in his one inning of work.  Hunter Pence was the star of the game for the Giants, going 2-5 with a homerun and three RBI’s.

As much as the pitching staff struggled, the Bucs’ offense was equally as ineffective against the Giants’ starter Matt Cain.  In all, the team managed just three hits, including one a piece from Travis Snider, Andrew McCutchen, and Garrett Jones.  The Pirates had as many errors as they did hits.  The result was an embarrassing beat down in front of their hometown crowd.

The crowds at PNC Park on Tuesday and Wednesday had plenty to cheer about, but unfortunately, tonight’s effort was worthy of booing.  This was undoubtedly a very disappointing conclusion to this series.  Still, the Pirates took two of three games from the defending World Series champions, so it was a quality performance against a worthy opponent.

The Bucs welcome the Los Angeles Dodgers to town for a three game series this weekend.  After taking two of three games from the Giants, another series victory against an N.L. West opponent would be huge for this team going forward.