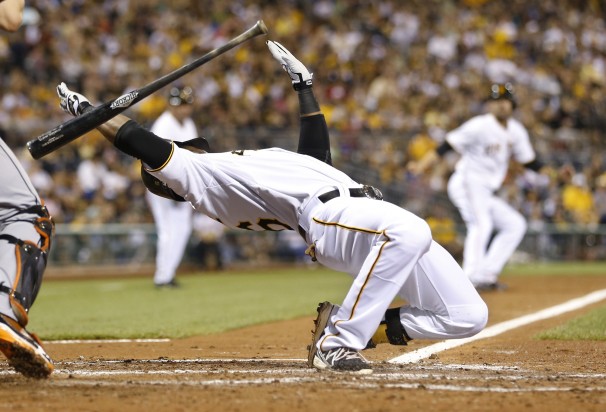 The Pittsburgh Pirates are twenty five games over .500.  Yeah let that sink in for a minute.  The Buccos improved their record to 69-44 with a 4-2 win over the Miami Marlins tonight at PNC Park.  Tonight’s game was a combination of great pitching by Charlie Morton, a shut down bullpen, stellar defense, and the usual assortment of timely hits for the Pittsburgh offense.

Morton looked like the Ground Chuck of old tonight during his seven innings of work.  While he did give up two runs on six hits, he struck out five and was in control with a good portion of his outs coming on ground balls.  Chuck even helped his own cause by tying the game in the fifth on a single to right.

The Shark Tank went to work in the eighth and fed on the Marlins hitters.  Tony Watson worked a flawless eighth inning striking out one batter.  That would lead to Mark Melancon picking up his seventh save of the year allowing one hit and retiring the final batter on a strikeout.

Andrew McCutchen put the Pirates on the board in the fourth with a solo home run to centerfield.  After Morton tied it up, the Buccos took the lead on a wild pitch that brought Jordy Mercer home.  While that was the last run Pittsburgh would need, they added an insurance run on a Pedro Alvarez sacrifice fly.

After losing two of three to the fish earlier this season, it is good the Pirates were able to take at least two from them at home.  Now the Pirates can wrap up this series with a win tomorrow.  Gerrit Cole will take the bump tomorrow at 12:35pm in this series finale.