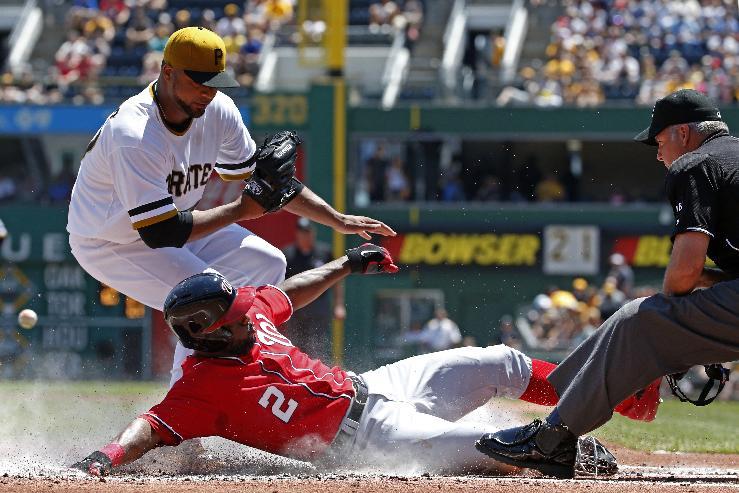 The Pittsburgh Pirates came into today’s contest on a four game winning streak and had a chance to sweep a four game series against the Washington Nationals.  Washington had other plans, as they jumped out to an early lead, built upon it, and kept the Pittsburgh offense in check for a 5-2 victory.

Francisco Liriano continued to struggle today and it did not take long for the Nationals to jump on him.  A wild pitch by Liriano with runner’s on second and third would lead to the first run of the day for Washington.  The second run came on an Ian Desmond RBI single to shallow right field.  The fifth inning would see two more runs cross the plate for the Nats.  Anthony Rendon would triple in a run and then score on another wild pitch by Liriano.

The fifth inning would also mark the end of the day for Francisco as he would suffer his fifth loss of the year, giving up four runs on six hits, while striking out five and walking four.  In some cases it has been not getting much run support, but Liriano is clearly not the effective pitcher he was a year ago.  This should not be a surprise, because he has never been able to put solid back to back seasons together over the course of his career.

The Bucco bats finally came to life in the sixth, with a home run from the red hot Josh Harrison.  Washington would add a run in the seventh, before Pittsburgh scored their final run in the eighth with a RBI single by Ike Davis that scored Harrison.

It will always be tough for the Pirates to win when they get 0-4 days out of Andrew McCutchen and Starling Marte.  Both batters had chances to cut into the lead, especially Marte who would ground into a double play with runners on second and third in the sixth and strike out with runners on the corners in the eighth.

Overall it was a successful 4-2 homestand, with the Pirates hitting the road for ten games starting tomorrow afternoon against the New York Mets.   It looks like Brandon Cumpton will get the first crack at filling the empty rotation spot, though no official work has been made at this time.