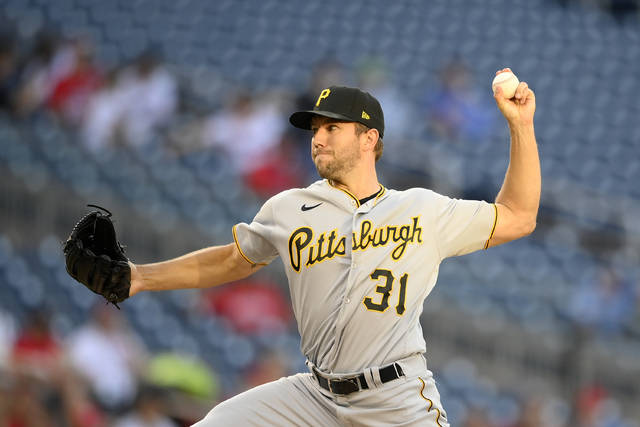 The slide continued on Tuesday night.  With an 8-1 loss to the Washington Nationals, the Pittsburgh Pirates have lost nine straight games are 20 games under the .500 mark at 23-43.

We all knew this season would be a difficult one for the Bucs, but these are some very difficult times for Pittsburgh baseball.

Tyler Anderson started on Tuesday, and struggled through his six innings on the mound.  He was tagged for six runs on 10 hits, falling to 3-7 with a 4.89 ERA for the season.  His mound opponent, Patrick Corbin, held the Bucs in check throughout his time on the bump.  He gave up one run on eight hits in 8.1 innings, improving to 4-5 on the year.

Washington took control of the game immediately, hitting the Bucs for five runs in the first inning.  A single by Josh Harrison got the scoring started, and a Yan Gomes’ grand slam made it 5-0.

A triple by Trea Turner in the fourth inning made it 6-0, and the Pirates didn’t get on the board until the seventh inning when Phillip Evans doubled home Gregory Polanco to make it 6-1.

A double by Victor Robles and a sacrifice fly by Kyle Schwarber in the eighth completed the scoring for Washington, arriving at the final score of 8-1.

This was another brutal loss for the Pirates.  Games like this are hard to watch…they were never really even in the game.  They immediately fell behind and they don’t have the offensive firepower to come from behind.  There isn’t much to be excited about at this point other than to hope this team somehow finds a way to snap this losing streak.

The Bucs will look to avoid the series sweep when they take the field tomorrow afternoon against the Nationals in the finale.  First pitch is scheduled for 4:05pm.