Nationals Use Power To Beat Bedard & The Pirates 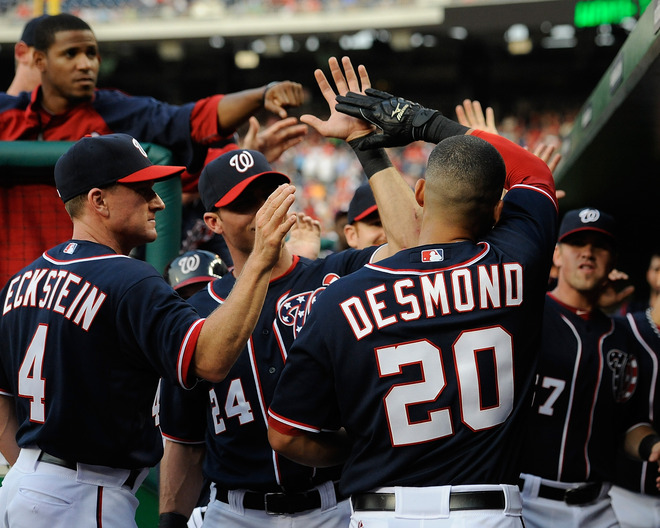 After a season-long three game winning streak earlier in the week, the Pirates lost a difficult game last night to the Miami Marlins.  In the second of a pair of short series on the road, the Bucs opened up a set against the Washington Nationals tonight in our nation’s capital.  Unfortunately for Pittsburgh, after a three game winning streak, they’ve now dropped two straight following a 7-4 defeat tonight at Nationals Park.

Erik Bedard pitched well for the most part tonight.  And once again, he received limited (at best) run support from his offense.  The left-hander was making his first start since he pulled himself from a game against the Nationals last week due to back spasms, and he only gave up six hits through six innings.  The problem was that three of those six hits he gave up were homeruns.

Ian Desmond, Adam LaRoche, and Xavier Nady each had a solo homerun against Bedard, who also had seven strikeouts but made a few detrimental mistakes.  Desmond led off the third inning with his round-tripper, while LaRoche and Nady hit back-to-back homers in the sixth.  It was a special night for LaRoche, who is off to the best start of his career.  He went 3-4 with four RBI’s, bumping his season average to .339.  His 1000th career hit was a three-run double in the seventh inning.

This was certainly not an inspiring appearance by Evan Meek, who was recalled today from Triple-A Indianapolis in exchange for the struggling Alex Presley.  Meek did give up the three-run double to LaRoche, but much of the damage was self-inflicted.  After hitting Jesus Flores with a pitch to lead off the inning, he issued a pair of two-out walks to Bryce Harper and Ryan Zimmerman, loading the bases for LaRoche.  The result was an ugly line of 1 inning, three runs, one hit, two walks, and a ballooned ERA of 7.59.  Ouch.

On a bright note, however, Jared Hughes tossed another scoreless inning in the eighth tonight.  It was his ninth consecutive inning without a blemish, lowering his ERA to 1.31 for the season.

Offensively, it was another frustrating night for the Bucs against Nationals’ starter Gio Gonzalez, despite scoring four runs (gasp).  Josh Harrison, making the start at third base in place of Pedro Alvarez, was 2-4 with a homerun and three RBIs, while Andrew McCutchen added two singles, bumping his average to .344.

Unfortunately, the rest of the Bucs’ lineup managed just two hits, including a single each from Jose Tabata and Rod Barajas.  Neil Walker went 0-4 on the night, dropping his average to .260 for the season.  Casey McGehee, although he did tally an RBI on a sacrifice fly in the eighth, went 0-3.  With an average of .210 and zero homeruns, he is easily in the category of incredibly disappointing acquisitions.  And while his season numbers are still poor, Barajas appears to be seeing the ball much better and is swinging a smoother bat.

While tonight, the Pirates’ pitching wasn’t its usual self, giving up seven runs, the main issue is still with the offense.  Not to take anything away fromHarrison’s night, but his bat is certainly not something the Bucs can rely upon on a consistent basis.  McCutchen continues to carry the load, but there’s only so much he can do.  Between McGehee as well as Clint Barmes, there is no confidence at the plate that these guys are able to get on base.  It puts an incredible amount of pressure on the pitching staff because, as we’ve come to learn, the offense is unable to muster together more than a few runs per game on most nights.

The Pirates will try to earn a split with the Nationals tomorrow night as the two teams wrap up this quick series.  Tomorrow’s game will also be the final matchup of the 2012 regular season between the Bucs and Nats.  James McDonald, who is quickly emerging as the team’s top starter, will take the mound against Washington’s Jordan Zimmermann.