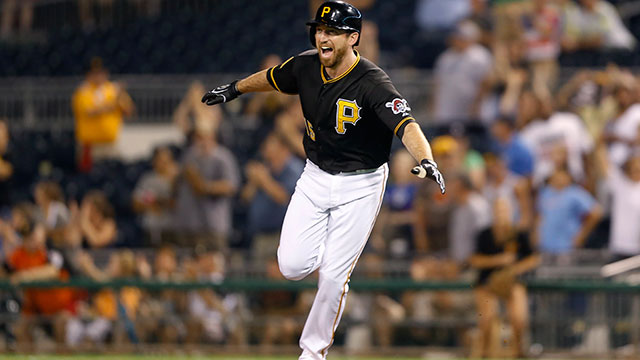 Tonight’s ballgame between the Pittsburgh Pirates and Arizona Diamondbacks was two games in one.  The first eight innings was total dominance by Arizona pitcher Wade Miley, however it was the bottom of the ninth that saw Pittsburgh score three runs and steal game one of this three game series 3-2.

Miley dominated over the course of his eight innings of work tonight.  He was perfect through the first four innings and completed his night with ten strikouts.  Before he came out to pitch the ninth inning, he had only given up two hits, with no runner making it past first base.

Jeff Locke started for the Pirates and while he gave up eight hits, he worked his way out of the few jams he found himself in.  The two runs he gave up came in the fifth inning.  A bad throw to second by Gaby Sanchez allowed Paul Goldschmidt to be in scoring postion with two outs for when Miguel Montero would single to shallow right.  Montero would reach second on the throw to the plate.  That extra ninety feet would allow him to score on another shallow single to right, this time by Aaron Hill.

In the top of the ninth Josh Harrison, who made the start in right field tonight, would throw out Gerardo Parra at the plate for a huge run saving out.  That out would prove big one inning later.  Miley would face two batters in the ninth and give up singles to both of them.  Addison Reed replaced Miley and got Harrison to fly out to right.  Starling Marte stepped in and hit a bases clearing double to center field to tie the game at 2-2.  Marte would reach third on the throw to the plate.  After Andrew McCutchen was intentionally walked, Ike Davis would hit a pinch hit walk off single to raise it for the Buccos!

Great comeback win for Pittsburgh tonight, as they played a full nine innings to take a win from Arizona.  Now they need to ride this momentum into tomorrow night and hopefully for the rest of the home stand.  Tomorrow night’s game will start at 7:05pm and feature Charlie Morton taking on Chase Anderson.