No Love For McCutchen At Home Run Derby 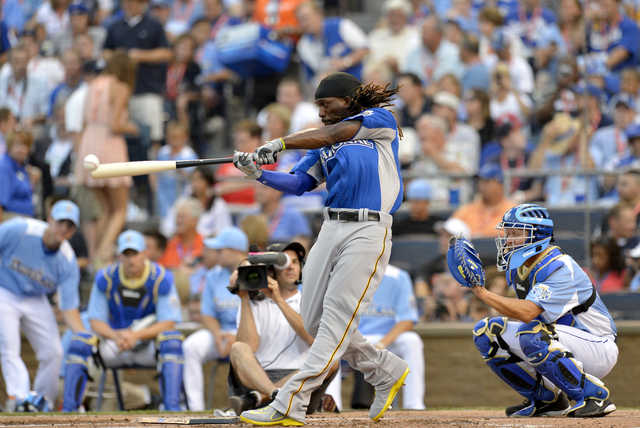 Since the Pirates are off until Friday, we at Fans From The Stands need to keep ourselves busy.  Luckily, the well-deserved recognition of the Bucs’ first half success by Major League Baseball resulted in two players being selected for this year’s All Star Game, Andrew McCutchen and Joel Hanrahan.  McCutchen was also selected to participate in the State Farm Home Run Derby, held last night at Kansas City’s Kauffman Stadium.

Prince Fielder won the Derby for the second time, joining Ken Griffey Jr. as the only player to win the competition multiple times.  He beat Jose Bautista in the final round, and put on just as an impressive performance as he did when he won the competition at Busch Stadium three years ago.  The audience was in awe of the Detroit Tigers’ slugger’s power, and there was no doubt he would be the winner, even from the very first round.

As for McCutchen, he hit four homeruns, but was eliminated in the first round.  But what was frustrating and aggravating from a Pittsburgh fan’s standpoint wasn’t his early exit from the competition.  Rather, it was the blatant disrespect he was given during his performance.

ESPN covered the event, as is the case every year, and the sheer lack of acknowledgement for a guy who is having an incredible season so far was beyond ridiculous.  During Cutch’s round, the commentators were speaking with Josh Hamilton of the Texas Rangers, who was clearly more important to them than the competition ongoing on the field.

McCutchen is MLB’s leading hitter at .362, and his 18 homeruns and 62 RBI’s, along with an array of other impressive statistics, make him the leader in the N.L. MVP race and among the very best in all of baseball.  Not to mention, he is the BIGGEST reason the Pirates are where they are at the All-Star break.  The Bucs are baseball’s best story in 2012, and McCutchen is their biggest and brightest star.

Expect more of the same tonight during the All Star Game.

As this season continues and if the Pirates maintain their reign atop the N.L. Central, they’ll garner more attention from the national media, which was just beginning to happen last year before their monumental collapse during the final two months of the season.

But last night was an opportunity for baseball lovers across the country to see Andrew McCutchen, one of the best players in the game.  That’s what the All-Star experience is all about…to recognize the best players in baseball and showcase them for everyone to see.  But it’s also a time to show appreciation and respect for them, and when the biggest sports network doesn’t do so, it sets a bad tone for the rest of us.

We, in Pittsburgh, realize the superstar we have in Andrew McCutchen…and the rest of Major League Baseball will continue to discover it for themselves.  Displays like last night should ferment in the minds of the Bucs’ players, particularly McCutchen.  As if the guy needs more motivation…

Following tonight’s All-Star game, the league will have Wednesday off, whiles games resume on Thursday.  The Pirates open up their second half of the season on Friday against the Milwaukee Brewers at Miller Park.