Nutting Echoes Hurdle and Coonelly, Announces A Change In Expectations 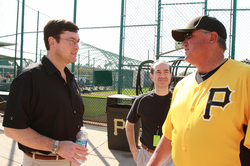 First Hurdle.  Then Coonelly.  Finally, today it was Bob Nutting who spoke to the staff and players of the 2011 Pirates behind closed doors prior to the day’s morning workout.
“The real message was a change in level of expectations,” the Pirates owner said.  “It is critically important that they understand, and we understand, that 2011 is not going to be a year where small bits of incremental progress are going to be adequate.”
Mr. Nutting doesn’t stop there:  “Until we win a National League championship, we are not going to be satisfied with incremental progress.  It is critically important they understand that right up front.”
While initially these comments are quite uplifting from a Pirates’ fan standpoint, they also sound quite familiar to previous seasons.  His address to players certainly wasn’t out of his normal mode of operation in spring training, as for the past few seasons he has addressed players and staff early in camp.
Again, these comments about expectations are inspiring, and they would be VERY encouraging if we hadn’t heard them before, year after losing year.  Personally, I find it strange that the Pirates are coming off a season in which they won the fewest games in a year since 1952, yet their owner is speaking of a National League championship being the only outcome with which he will be satisfied.  That seems like quite an unreasonable expectation for improvement.
One comment that Mr. Nutting did make today that I felt was correct and appropriate was his response to the question of what happens if there isn’t progress this season:
“I think today is the first day I have addressed the group and we have our first spring training game coming up Saturday,” he said.  “It is not the right time to start speculating on ‘what if we fail?’ What we need to do is be focused on what the goal is, what the target is, and be committed to achieve it.”
Well done, sir.  It’s true, too.  The future of Neal Huntington and the questions surrounding his contract extension (or lack thereof) really shouldn’t be at the forefront of the media’s inquiries with less than a week before the club’s opening game of spring training.  But I guess that’s what happens when the team has lost so many games for so many years.  The focus is no longer on the field; it’s now in the offices and behind the desks.
Of course, there’s always that one media representative to ask about the fans and the criticism they have openly remarked towards the team and the management.  Mr. Nutting, of course, responded professionally and courteously:
“I absolutely listen to it (criticism), it makes a huge difference.  I have a tremendous amount of respect for and appreciation for the fans, that’s the reason the franchise exists.  That’s one of the reasons is such a tremendous baseball town and sports town.  We owe our fans every opportunity to listen.”
If they put a good team that is well coached on the field on Opening Day 2011 and throughout the year, they’ll be hearing the fans cheering all across the .
What do you think of Bob Nutting’s comments?  Write to us at fansfromthestands@yahoo.com and let us know what you think!
And…
As Always…
Let’s Go Bucs!
***Special Thanks To Colin Dunlap Of The Post Gazette For Contributions To This Article***