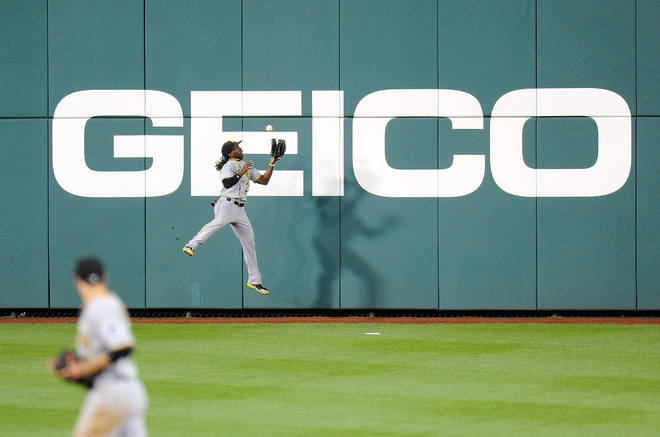 Tonight is the type of night Pittsburgh Pirates fans would love to see more often, a very good pitching performance from the starter and bullpen, combined with a nice offenseive output.  If those two things can become the norm then this could be a fun summer for Bucco Nation.  James McDonald led the way on the mound, while Andrew McCutchen continued his dominance at the plate in a 5-3 win over the Washington Nationals.

McDonald was lights out through the first five innings tonight, before being lifted with two outs in the sixth inning.  His stat line through five innings included one hit, ten strikeouts and one walk.  He would strike out one more batter in the fifth, but did give up three runs before being replaced by Tony Watson.  After Watson finished that inning, the three headed bullpen monster of Juan Cruz, Jason Grilli, and Joel Hanrahan silenced the Nats bats for the victory.

Cutch tore it up again tonight at the plate.  He would go 2-4 with each of his hits being home runs.  His first came in the first inning, while the second one would be saved until the sixth.  McCutchen also made a great catch in centerfield up against the wall in the bottom part of the fifth, this is what a leader does both at the plate and in the field.  Rod Barajas is starting to look like a baseball player again.  He homered again tonight, while adding two singles to the box score.  While his .214 average is not anything great, it’s nice to see it heading upward after a slow start.  Josh Harrison showed again why at the moment he deserves to be in the starting linep at shortstop with two hits and a run scored tonight.

Now it is off to the motor city for a three game interleague series against the Detroit Tigers.  I am interested to see if the Pirates continue their interleague success of last season or do they look the 2010 and past Buccos.  The Tigers have been underperforming this year and have an 18-20 record likePittsburgh, so this could be a chance for the Pirates to return home on Monday with a winning road trip.