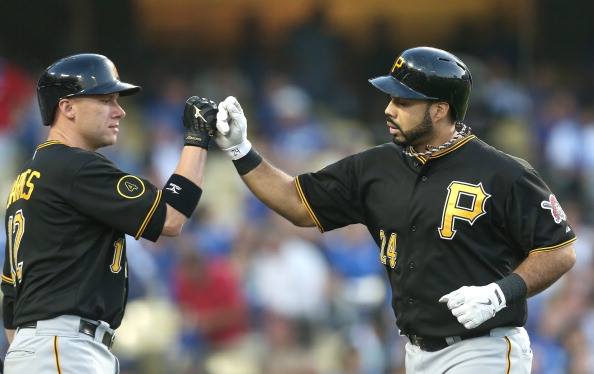 The Pittsburgh Pirates are sitting on what could be a turning point to the 2014 season.  They began the night six games under .500 and about to start a seven game road trip on the west coast.  The west coast has not been kind to Pittsburgh over the past decade.  Up first for the Pirates was a four game series against the Los Angeles Dodgers.  Los Angeles boasts a strong lineup and pitching rotation, so the Buccos would need to be on top of their game if they hoped for a win.

This game had a back and forth feel early on.  The Dodgers jumped out to a lead in the bottom part of the first on a double by Yasiel Puig.  Pedro Alvarez would then hit a solo home run in the top of the second to tie the game 1-1.  Los Angeles retook the lead with a Dee Gordon RBI single.

The Buccos would tie the game again in the fifth on a Josh Harrison base hit to right field.  They would then take the lead in the sixth when Russell Martin went deep to left field.  Once again the Dodgers would battle back to tie the game on a Hanley Ramirez single.  Pittsburgh starter Gerrit Cole settled in after that and finished the night with one out in the sixth.  He would allow six hits, three runs, two walks and three strikeouts.

The Pirates were finally able to put a crooked number up on the board in the seventh.  Harrison began the scoring with a single to right center field that scored Clint Barmes, Neil Walker then brought in Harrison with a single.  Gaby Sanchez would pinch hit and bring home the third run of the inning on a double to left.

The bullpen took care of business for the remainder of the game.  Tony Watson finished off the seventh and then Mark Melancon came into the eighth and struck out two of the three batters he faced.  Jason Grilli entered the game in the ninth after manager Clint Hurdle placed him back in the closer role earlier in the day.  Grilli made that decision look like the correct one as he retired three of the four batters he faced to pick up his sixth save of the year and cap off a 6-3 Buccos win.

Good start to the series for Pittsburgh, the key will be able to carry this momentum for the rest of the trip.  Tomorrow night they will send Francisco Liriano to the bump to take on Zack Greinke.  Game time is once again 10:10pm, so hopefully you can sleep in Saturday morning.