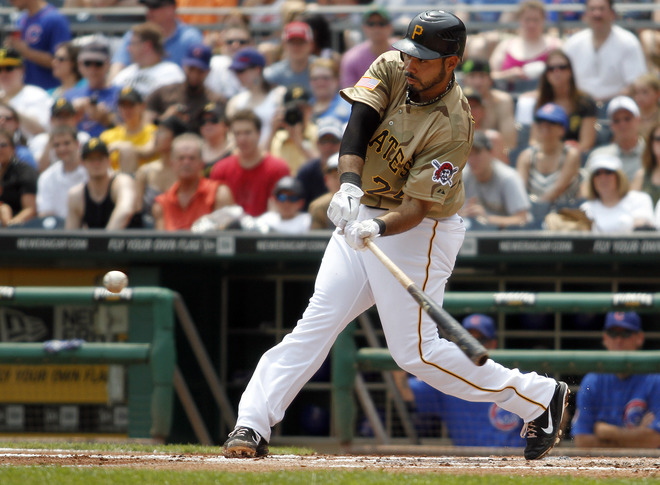 See, that’s what the Pirates’ offense can do on any given day.  Well, maybe not.  But still, the Bucs’ bats were on fire this afternoon on a hot & humid today at PNC Park.

Pittsburgh broke today’s game wide open with a 6-run sixth inning on their way to a 10-4 blowout of the Cubs.  The Bucs helped Chicago extend their losing streak to 12 games, while the 10-run outburst aided the home team to crawl back within one game of the .500 mark.

Pedro Alvarez hammered a three-run homerun in the first inning to get things started.  It was fantastic to see him finally show some power for the home fans, as well as snap out of the extensive funk in the cleanup spot.  Pedro tallied four RBI’s this afternoon to lead the Bucs, but the offense was widespread today.  Andrew McCutchen added two hits, including a solo homerun in the fifth inning, while Garrett Jones had a two-run bomb in the sixth.  Gorkys Hernandez recorded his first Major League hit today, which happened to deliver two RBI’s as well.

Overall, it was a great thing to see on the field today.  This is the lineup that is delivering right now, so this is the group of players that needs to play for the time-being.  Don’t get us wrong here, we know that this was the Cubs this weekend.  But still, this is an encouraging sign for the fans to, if nothing else, remind us that this offense can deliver.

And what will undoubtedly be overlooked today is the performance of Erik Bedard, who pitched solidly this afternoon.  He tossed six innings today, giving up only two hits, but did walk four batters.  The bullpen did have a hiccup today, as Chris Resop and Juan Cruz collectively gave up four runs on five hits in three innings.  Luckily for the Bucs, it came on a day when the offense put the game out of reach.

The Pirates will need to continue to play well on all facets of the game as they welcome the N.L. Central-leading Cincinnati Reds before heading to Miller Park to face the Milwaukee Brewers.  They’ll open up a three-game series against the Reds tomorrow afternoon at PNC Park.  First pitch is slated for 1:35pm.