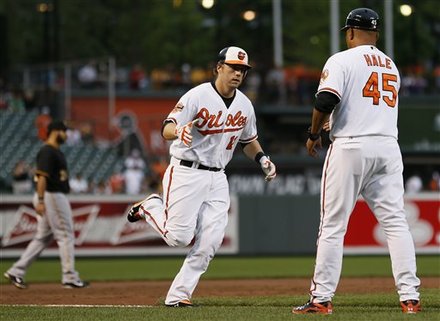 If management learned anything from this game tonight, I hope it was that Brad Lincoln is not a Major League Baseball starting pitcher.  Tonight was his third start of the year and after a very good first start his last two have been duds.  Lincoln would only go 4.1 innings allowing four runs on nine hits, while striking out three and walking one batter.  I know that injuries have placed Brad into the starting rotation, but I hope that if Jeff Karstens and Charlie Morton are out much longer, that they call up a pitcher from Triple-A.

The bullpen was also off tonight, most notably Chris Resop.  Resop would work the sixth inning and allow three earned runs on three hits.  Juan Cruz finished off the fifth, while Doug Slaten would pitch in the seventh and eighth innings.

While Clint Barmes and Resop would yield errors in the field, the offense looked great tonight.  The Pirates collected ten hits tonight, with Neil Walker, Casey McGehee, and Jose Tabata each having two hits.  McGehee and Walker would each have home runs.  The only two starters not to have hits were Rod Barajas and Pedro Alvarez, who would see his batting average drop to .195.

It may have not been pretty tonight, but the offense held up their end of the bargain.  This series against the O’s will be a tough one for the pitchers because ofBaltimore’s ability to score runs.  That being said, they do give up runs, so if the Pirates starters can go deep into games with the lead and hand it over to the bullpen, victory’s should happen.  Game two of this series is tomorrow night with first pitch scheduled for 7:05.