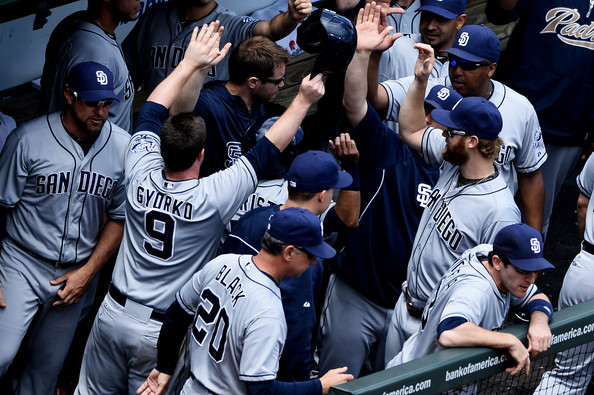 Well this is certainly not what we all hoped and expected from the Pittsburgh Pirates and San Diego Padres.  But why should we be surprised?  After all, the Padres have owned the Bucs in Pittsburgh, holding a 30-10 record.  Tonight, it was more of the same as the Jeff Locke and the Pirates fell behind early and couldn’t come back, losing 5-2 in the second game of the four-game series.

Locke and the Pirates fell behind in the third inning on a three-run homerun by Jedd Gyorko.

Pittsburgh answered immediately in the bottom of the inning.  Locke led off with a single, and after Starling Marte and Jordy Mercer struck out consecutively, Andrew McCutchen smashed a ground-rule double to put runners on second and third for Marlon Byrd.  The Bucs’ right fielder came through with a two-run double (with a little help) to bring the Pirates with a run at 3-2.

Unfortunately, things didn’t get much better for Locke on the mound.  Three batters into the fourth inning, the Padres had the bases load with no outs.  The Buccos got out of it while giving up only one run, but trailed the Padres midway through the game, 4-2.

Marte hit a 1-out bunt single and McCutchen forced a two-out walk to put runners on first and second for Mr. Byrd.  But unfortunately, he couldn’t come through this time around, chasing a 3-2 pitch in the dirt to end the inning.

That was really the last time the Pirates threatened.  In fact, since the third inning, the Pirates could only muster one hit against a string of Padres relievers.  San Diego added a run in the 7th inning to help them ease to a comfortable victory tonight.

Locke gave up four runs on seven hits through five innings, but the big hit was the three run homerun in the third inning.  The bullpen did a solid job, although Bryan Morris was tagged for a run in the seventh.  Offensively, it was another frustrating one for Pittsburgh.  McCutchen led the team with two of their seven hits, including a single, a double, and a walk.

It really is remarkable what the Padres have been able to do here at PNC Park.  But the Bucs need to snap out of this sudden funk they are in immediately, as teams like the Cincinnati Reds and Washington Nationals are playing well and are hot on their heels.

The Pirates and Padres will face off in the third game of the series tomorrow night at PNC Park.  Charlie Morton will make the start at the 7:05pm first pitch.