Padres Comeback From Six Runs Down To Defeat Pirates 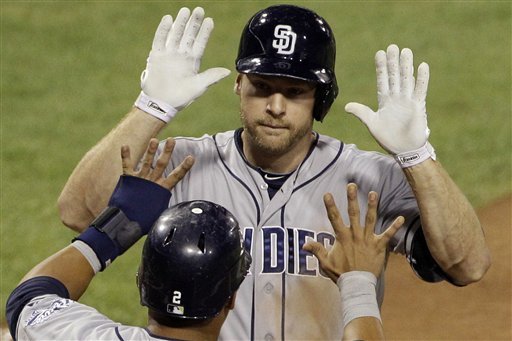 The San Diego Padres sure love PNC Park and can you blame them? The Padres have won their last four games in the Burgh including tonight’s 9-8 win.  The Pittsburgh Pirates appear to be on the fence of chasing a playoff spot, or just going after the elusive .500 mark.

With a six run lead in the fifth things looked promising for our Buccos, but then James McDonald imploded quickly.  With one out, McDonald would walk a batter and then give up a single.  Jesus Guzman then hit a two RBI double.  An Alexi Amarista single brought in Guzman, which was followed by Chase Headly blasting a three run homer that chased McDonald from the game.

McDonald has been flat out awful since the All-Star break, and while I have a hard time questioning Clint Hurdle, it’s time he takes McDonald out of the rotation for a game or two.

Pittsburgh was able to retake the lead in the sixth on a Rod Barajas single, but San Diego came back again.  Headley would go yard in the seventh to put the Padres up for good.

The only thing good I can pull from this game is the fact that the Buccos scored eight runs on eleven hits.  That being said, there is no excuse for losing to a team that was fifteen games under .500 when you are in a chase for the playoffs.

Pittsburgh will need to win these next two games if they hope to keep pace with the Cincinnati Reds in the division.  A.J. Burnett will once again face the task of turning things around for the Buccos.  First pitch tomorrow night is scheduled for 7:05.