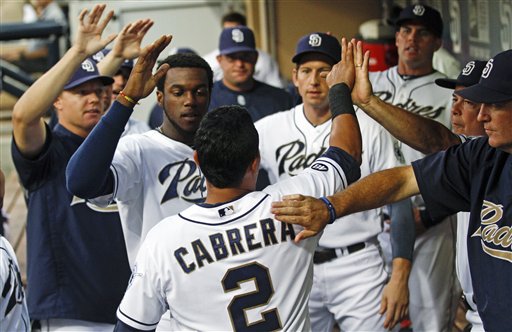 The Pittsburgh Pirates came into game one of this three game series with the San Diego Padres with a worn out roster, because of a 19 inning affair in St. Louis the day before.  This multi-inning win caused many roster moves, the biggest being Kevin Correia being called upon to start only hours after pitching two innings of relief.

Correia has been a scapegoat for much of this season, but has been consistent in his last handful of starts, giving the Buccos a chance to win and tonight was no different.  He would give up three runs, two earned, on seven hits, while walking one and striking out two batters.  Two runs would score in the first inning, the first on a Wilson Venable single, while run number two came on a Yonder Alonso ground out to second.  Venable struck again in the second with a RBI double to right.

That was all the offense the Padres could produce on the night as Tony Watson would close out the fifth and the Major League debuts of Kyle McPherson and Justin Wilson would also produce three innings of shut out baseball.

For a team in a playoff race, a deficit of three runs should be manageable, but the offense would once again not find a spark agains the Padres.  With only six hits all night, scoring chances were limited.  Pittsburghhad a chance in the third with runners on the corners and one out, but that saw Travis Snider and Andrew McCutchen produce outs.

The Pirates had two runners on again in the fourth, this time with two outs, unfortunately, Rod Barajas would line out to left field.  They would end the shutout in the sixth.  After a Chase Headley throwing error allowed Cutch to reach second on a ground ball to third, Neil Walker would collect an RBI single to right.  McCutchen then stepped to the plate in the seventh with two on and two outs, but again could not capitalize, as he was sent back to the dugout after swinging at strike three.

With Cutch in this slump we all see how this team goes as he goes.  His inability to produce at key times over this stretch has been huge in the amount of losses this team has collected.  Sure it may be unfair to saddle him with a lot of the blame, but as a team superstar he is expected to elevate his game.

Inning number eight saw another two runners on opportunity, but Gaby Sanchez and Rod Barajas were unable to move the runners over.  That would lead to Jose Tabata being stranded at second in the ninth and a 3-1 defeat for the Buccos.

San Diegois a struggling team, but has figured out Pittsburghso far this season.  The next two games of this series are about as close to must wins, as they have had this year.  A.J. Burnett will pitch tomorrow night with first pitch scheduled for 10:05.