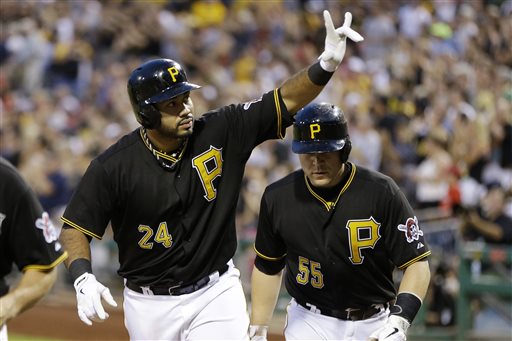 In last night’s 3-1 loss to the Philadelphia Phillies, the Pittsburgh Pirates squandered numerous opportunities, including two innings in which they failed to capitalize on loading the bases and a chance to take the lead.  Tonight, the Pirates did just enough with the bats and held off a late Phillies’ charge, beating their cross-state rivals 6-5 at PNC Park.

Pedro Alvarez hammered a three-run homerun to break the game open in the fifth inning.  It was part of a four run, six hit inning that saw three consecutive singles by Andrew McCutchen, Gaby Sanchez, and Russell Martin, which tied the score at 1-1.  Alvarez then sent a pitch over the right center field wall to give the Bucs a three-run lead.

After Philadelphia scored twice to pull within a run, the Pirates took control right back in the sixth inning.  McCutchen led off with a triple, his first of the season, and scored on an RBI double by Martin.  Sanchez, who drew a walk, moved to third on Martin’s double and scored on a wild pitch.  Heading to the ninth inning, the Pirates led 6-3 with their closer Jason Grilli approaching the mound.

Grilli didn’t have his best stuff on the night.  Three consecutive batters, the Phillies were down to their final strike, but they battled their way right back into the game.  Jimmy Rollins hammered a two-out double, and Dominic Brown crushed a two-run homerun over the Clemente Wall in right, his 22nd of the year, to bring the Phillies within a run.  But Grilli settled down, and struck out Delmon Young to end the game.

Jeff Locke continued his remarkable season tonight, winning his eighth game of the season (8-1), giving up three runs (two earned) on seven hits through 5.2 innings.  Justin Wilson came in and got the final out of the sixth inning, while Jeanmar Gomez and Mark Melancon each pitched a scoreless inning in relief.  Even though Grilli struggled and gave up two runs in the ninth, he still closed things out effectively, notching his 28th save of the year.

This was a nice response from the Pirates after dropping a difficult one to their cross-state rivals last night.  They have now put themselves in position to win yet another series.  The Bucs and Phillies will face off in the rubber match of the series at a special 1:35pm start time on Independence Day.  Cole Hamels will start for Philly against the Bucs’ Gerrit Cole.