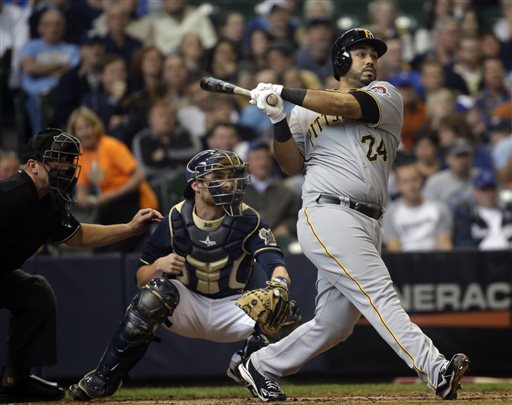 Last night, the Milwaukee Brewers scored only two runs in their victory over the Pittsburgh Pirates at Miller Park.  This afternoon, they once again scored two runs, but it wasn’t nearly enough.  Pedro Alvarez hit two homeruns to lead the Pirates over the Brewers 5-2 in the second of the teams’ three game series in Milwaukee.

Alvarez was the offensive star of the day, going 2-3 with two homeruns and three RBIs as the Pirates took the lead early and never gave it up on their way to a rather comfortable victory over their divisional foes.  Carlos Gomez had two homeruns for the Brewers in a losing effort.

Andrew McCutchen hit a solo homerun in the first inning to give the Bucs an early 1-0 lead, and Alvarez followed that up with a two run shot in the second inning.  Neil Walker added a solo homerun of his own in the fourth, and Pedro hit his second blast of the game in the top of the ninth.

Jeff Locke was superb this afternoon for the Pirates, giving up just three hits in six shutout innings.  His ERA now sits at 2.45 for the season with a 5-1 record.  Justin Wilson, Mark Melancon, and Tony Watson pitched three innings of relief.  Jason Grilli was sat down after Alvarez’s homerun in the ninth inning, eliminating the save situation.

This was a huge response by the Pirates after a difficult loss last night.  Alvarez now has 10 homeruns, putting him ahead of his pace from a year ago.  The Bucs have now set themselves up for a chance to win a series in Milwaukee.  The two teams face off tomorrow afternoon at Miller Park.