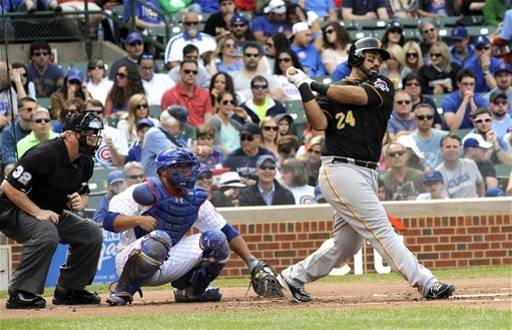 Entering this week’s series against the Chicago Cubs, the Pittsburgh Pirates were struggling to win ball games.  Now, after a 6-2 victory over the Cubs this afternoon led by the power of Pedro Alvarez, the Bucs are on the verge of a series sweep.

Alvarez went 2-4 with three RBI’s, including a run-scoring single in the second and a two-run homerun in the fourth inning.  Travis Snider added an RBI single in the third, while Russell Martin hammered a two-run blast in the eighth inning.  Starling Marte added two hits as well.

A.J. Burnett took the mound today for Pittsburgh, and held the Cubs in check for the majority of the game.  Other than a two-run homerun surrendered to Alfonso Soriano in the ninth inning, Burnett was incredible.  In all, he gave up two runs on four hits and three walks in 8.1 innings.  After Soriano’s homerun, Clint Hurdle called in Tony Watson, who retired the final two batters to end the game.

With today’s victory, the Pirates clinched a series victory in Chicago.  After the previous few series, this was a necessary series to win.  They are now in prime position to take the series sweep against the Cubs.  Great performances by Burnett and Alvarez led the Pirates this afternoon.  They Bucs are back on the winning track, with hopes of continuing the trend tomorrow in the series finale against the Cubbies.