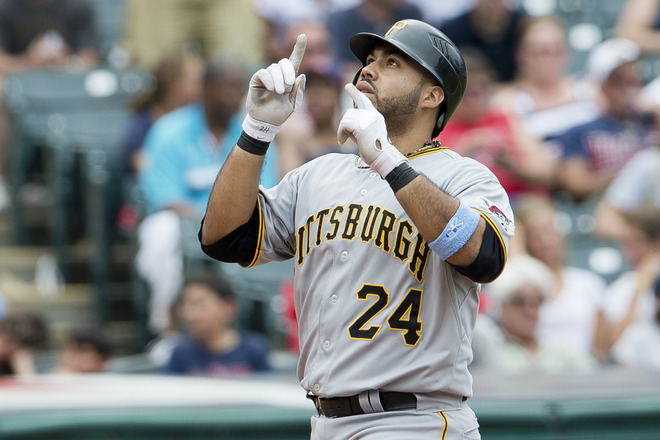 El Toro strikes again.  For the second straight day, Pedro Alvarez unleashed his raw power for a pair of home runs to lead the Pittsburgh Pirates over the Cleveland Indians 9-5.  Whatever Pedro has done since he woke up Saturday morning, I highly recommend that the organization makes him continue this practice until the final out of the season.

While yesterdays 9-2 win did not need the extra power, today’s game needed all the runs the Buccos could gather.  This was because of another poor start from Brad Lincoln.  I hope that either Jeff Karstens is able to come back after his Tuesday start in Double A or a Triple AAA starter is promoted. Lincoln just does not give this team a chance win when he starts.  He has shown over the course of his career that he belongs in the bullpen.  Today’s final line of 3.1 innings, four runs on eight hits, and two strikeouts with one walk, show is inability to go deep into ball games.

After being down two runs, Pittsburghtook the lead in the fourth with three runs off of the bat of Alvarez.  This was in large part to Clevelandshortstop Asdrubal Cabrera making his first of three errors on a groundball from Casey McGehee that kept the inning alive with two outs.  This lead was lost in the bottom part of the inning on a two RBI double by Shin-Soo Choo.  Tony Watson replacedLincoln and the Pirates fortunes took a change for the best in the top part of the fifth.

Six runs would cross the plate for the Buccos in the fifth.  The first run came off of a solo home run from Alex Presley, his fifth of the season.  With the bases loaded and one out McGhee hit what should have been an inning ending double play, but Cabrera bobbled the ball in his glove and then rolled it into the hole between first and second.  This would allow Neil Walker and Andrew McCutchen to score.  After a pitching change and with two runners on, Alvarez went yard again for the 12th time this year, collecting three more RBI.

The Tribe collected another run in the seventh, off of Jared Hughes, but that was the only blemish by the pen today.  Watson upped his record to 4-0, Jason Grilli struck out a batter in a flawless eighth inning, and Joel Hanrahan finished offCleveland in the ninth.

For a road trip that started off awful, Pittsburghfinished it with a bang.  18 runs over two games is a huge offensive output for this team, but more importantly they moved back to three games over .500.  Monday will be an off day for the Pirates, which will be followed by a three game series with the Minnesota Twins.  The Twins are 14 games under .500, 9.5 games back in the American League Central, and have a run differential of -75.  That’s 49 runs worse than our Buccos.  This is another series Pittsburgh needs to take if it wants to remain close to the Cincinnati Reds in the battle for the division and to end this 19-year losing streak.