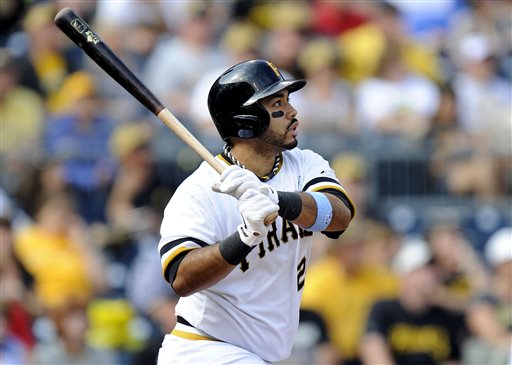 After an hour and a half delayed start, Gerrit Cole made his second Major League start this afternoon.  Pedro Alvarez and Alex Presley supplied the power, while Cole managed his way through five plus innings, as the Pittsburgh Pirates defeated the Los Angeles Dodgers, 6-3, at PNC Park.

Cole improved to 2-0 on the season with his performance today, giving up three runs on seven hits through 5.2 innings.  Justin Wilson, Mark Melancon, and Jason Grilli combined to pitching 3.1 scoreless, hitless innings of relief.  Grilli earned his Major League leading 25th save of the year.

The Pirates got out to an early lead on a two-run double by Garrett Jones in the first inning, scoring Jordy Mercer and Andrew McCutchen. After the Dodgers tied the game win single runs in the second and fourth innings, Alvarez hammered a 3-2 pitch from Zack Greinke over the center field wall, scoring Jones and Neil Walker, to give the Bucs a 5-2 advantage.

Andre Ethier singled home a run in the sixth to get the Dodgers within a pair, but Presley’s solo homerun in the bottom half of the inning put the game out of reach.

So here we are again, talking about another series victory for the Pirates.  Games and series like these are exciting and inspiring because the Bucs haven’t been playing their best baseball, but they’ve still found ways to win ballgames.  They’ll need to play solid baseball this week as they head out on the road, beginning with a four-game series against the Cincinnati Reds at Great American Ballpark.