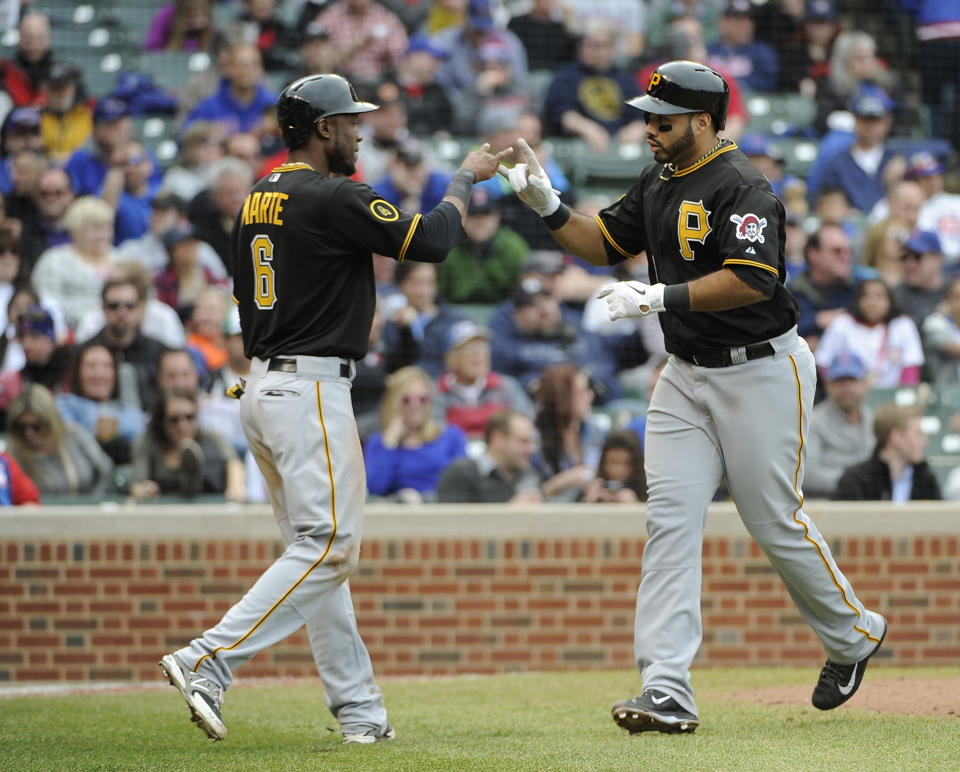 Things didn’t begin well for the Pittsburgh Pirates this afternoon against the Chicago Cubs at Wrigley Field, but they certainly ended with an unprecedented Bucco rally.  The two teams met for already the sixth time of this young season, which was also the rubber match of the three-game set in the windy city.

Pirates’ starter Gerrit Cole pitched a solid game, despite running into a few issues throughout.  Emilio Bonifacio led off the third inning by reaching first on Cole’s error with two outs.  He would later score on Tony Sanchez’s throwing error.

Travis Wood was rolling through the afternoon for Chicago, setting them up and sitting them down in the first five innings.  But he left after six frames, giving up one run on four hits with three walks and nine strikeouts.  Cole, on the other hand, also lasted six innings, giving up four runs (three earned) on five hits with two walks and 10 strikeouts.

The rally came in the seventh inning, starting with Neil Walker’s leadoff double.  Travis Snider then hammered a pinch hit two-run homerun to cut the lead in half, 4-2.  Starling Marte hit a one-out single, and after a Jose Tabata lineout and Andrew McCutchen walk, Pedro Alvarez stepped to the plate and belted a three-run blast to the seats, giving the Bucs a 5-4 lead.

The bullpen, as per usual, came in and did a solid job for Pittsburgh today.  Tony Watson and Mark Melancon pitched perfect seventh and eighth innings respectively.  Jason Grilli earned his third save of the season, but it certainly wasn’t easy.  With two outs and the bases loaded in the bottom of the ninth, Grilli induced a Bonifacio ground ball to first base to end the game.

Cole earned his second victory of the season (2-0) despite a wildly sloppy beginning to the afternoon.  Offensively, they struggled mightily, outside of that seventh inning.  Marte was the lone Pirate with a multi-hit game, going 2-4 with a run scored, a walk, and a stolen base, raising his average to .297 for the season.

This was a huge win for the Pirates, who early on looked like they would drop their first series of the season.  The offense came alive when it needed to, and the bullpen was strong enough to hold off a late inning rally from the Cubs.

The Pirates will be tested this weekend as they make their next stop on this nine-game road trip against the Milwaukee Brewers.  It will be an early season matchup of the top two teams in the N.L. Central at Miller Park this weekend.  Tomorrow’s first pitch is scheduled for 8:10pm.