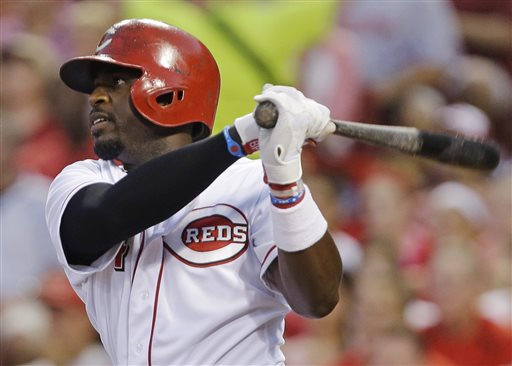 The Pittsburgh Pirates and Cincinnati Reds kicked off a highly anticipated weekend series tonight at Great American Ballpark in both teams’ first game of the season’s second half.  And tonight’s game featured an enticing matchup on the mound between the Bucs’ Francisco Liriano and the Reds’ Mike Leake.  While both pitchers had their ups and downs, it turned that a familiar Pirates’ foe, Brandon Phillips, made the difference with a huge hit with the bases loaded, leading Cincy to the 5-3 victory.

Chris Heisey hit a 1-out solo homerun to deep left field in the first inning to give the Reds an early 1-0 lead.  A messy fifth inning, including bluffs by Jordy Mercer and Pedro Alvarez on relatively simple ground balls, dug the Pirates in a deep hole.  After Heisey smacked a chopper to Pedro which turned into a Reds’ run and loaded the bases, Clint Hurdle pulled Liriano from the game in favor of Justin Wilson.  Phillips’ three-run double put the Reds on top 5-0, breaking the game wide open.

The Pirates got back in the game with a busy sixth inning, highlighted by three solo homeruns.  Starling Marte, Andrew McCutchen, and Russell Martin each went deep for Pittsburgh, cutting the lead to 5-3, chasing Leake from the game.  They had a chance to get even closer, but after putting runners on first and second, Todd Frazier’s play at third base robbed Clint Barmes of a hit, ending the threat.

Pittsburgh threatened again in the seventh inning.  Travis Snider led off with a pinch hit single, and Jose Tabata later induced a walk.  But with one out, McCutchen grounded into a fielder’s choice, and Alvarez struck out to end the inning.

That was the closest the Bucs would get, even though they did have the tying run walk to plate in the ninth inning against Cincy’s closer Aroldis Chapman in the form of Michael McKenry.  But, in what was the trend from the entire game, the Bucs couldn’t take advantage of an opportunity, and fell short against the Reds in the series-opener.

This was not a well-played game by either team. The Pirates made a few more mistakes tonight and it cost them the victory.  Cincinnati is a good team, especially at home, and the Pirates can’t afford to give them any help in these types of games.  From here on out, every game the Bucs play is important and crucial.  They didn’t play like they knew this was an important game tonight…they need to get better, beginning tomorrow.

The Bucs and Reds will match up again tomorrow night at Great American Ballpark.  Pittsburgh will look to pull even in the series and force a rubber match on Sunday.