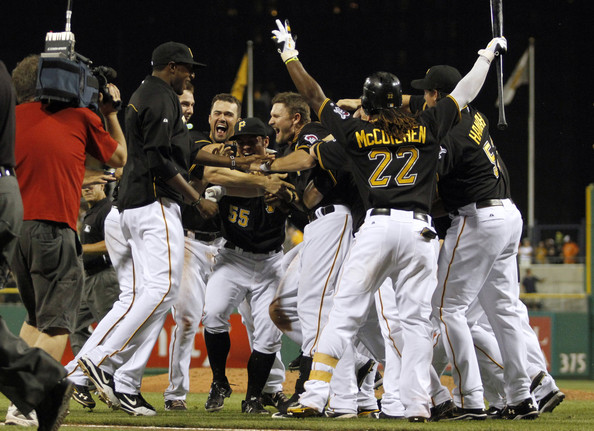 For the second consecutive season, the Pirates are in a position that no one around the Pittsburgh area thought they would be.  The Bucs won their 51st game of the season yesterday with a 9-6 series-clincher over the Colorado Rockies.  They are currently tied for first place in the N.L. Central with the Cincinnati Reds and are eleven games over .500 at 51-40.

Not to bring back any painful memories, but the Pirates making headlines (regional and national) this time last year.  After all, they were 51-44, which at that point, was the highest the team had been over the .500 mark in years.  They had won the first pair of games over the Reds at PNC Park, with a matinee on a Wednesday afternoon against Johnny Cueto.  The Reds beat the Bucs in a low-scoring affair to avoid the sweep.  The Pirates then hosted the St. Louis Cardinals in what was the biggest series ever at PNC Park (based on anticipation), and they lost two of three games.  They went to Atlanta and fans across Pittsburgh were introduced to Jerry Meals, then they were swept by the Philadelphia Phillies, and the rest, as they say, is history.

The Pirates suffered a ten game losing streak against the Phillies, Chicago Cubs, and San Diego Padres, went 8-22 in August, and ended the season with a 72-90 record.  Ugh.

But all we’ve been hearing so far this season is that this year’s team is different.  And we believe it.  One game at a time, this team is proving that they’ve come a long way from the group that significantly overachieved a year ago.  A.J. Burnett seems reborn, while James McDonald has emerged as one of the bright young pitchers in the National League.  What can we about Andrew McCutchen?  He’s hands down, the MVP at this point in the season.  Neil Walker is a .300 hitter, while Garrett Jones has provided some major pop at crucial points.  Pedro Alvarez is slowly emerging into the player we all hoped he would be, while Casey McGehee, after a horrible start to the season, is beginning to resemble his 2010 form.

Still, despite the success and the team’s suddenly explosive offense, those in and around the team, including fans and media, feel that the Pirates need to make a move at the trade deadline.  After all, that’s what contending teams do this time of year.  Up until last season, the Bucs hadn’t been in a position to shop at the trade deadline for years.  They picked up Derrek Lee and Ryan Ludwick, but at that point, the team had already begun their slide, and while Lee had a terrific end of the season, Ludwick clearly wasn’t motivated to be there, and it was reflected in his performance.

With the trade deadline less than two weeks away, rumors are at an all time high across the league.  Pitchers atop the trade market include Cole Hamels, Zack Greinke, Wandy Rodriguez, and Ryan Dempster, to name a few.  Position players that have been linked to the Bucs include Justin Upton, Stephen Drew, and Carlos Quentin.  So where do the Bucs go from here?

First of all, it doesn’t seem likely that guys like Hamels or Greinke will ever end up in Pittsburgh.  Who knows about players like Rodriquez, Dempster, or even his pitching mate in Chicago, Matt Garza.  But based on everything we’ve seen down the stretch and into the playoffs year after year, starting pitching is the determining factor in the winners and losers in October.

And as has been reported by a number of Pittsburgh media sources, the Pirates are actively looking for a middle-of-the-order power bat as well.  Upton is apparently at the top of the team’s list, but the Arizona Diamondbacks will want some combination of Jameson Tallian, Gerrit Cole, and Starling Marte.  It doesn’t appear as though the Bucs want to part with the two pitchers, but rumors are that they are actively shopping Marte.  Maybe there’s a hidden agenda as to why he hasn’t been called up from Triple-A Indianapolis…

So now, as they sit 51-40 and tied for first place in the division on July 19, the Pirates are faced with the dilemma of trying to win now while maintaining the quality prospects for which they’re building their future.  Do they go “all in” for this year, or do they see what the team can do as it stands now?

There are obviously varying opinions on this…but in my mind, you go for it this year if you’re the Pirates.  First of all, I wouldn’t deal either of their marquee, top prospect pitchers.  But a deal involving a couple of bullpen arms and a Starling Marte for a quality bat like an Upton, Quentin, or Drew?  Absolutely.  Look, Marte isn’t proven at all at the Major League level…in fact, sources in and around MLB are even saying they have serious doubts about his ability to be a legitimate star at the big league level.  Even the fact that the Pirates haven’t brought him up yet, despite a glaring hole in the outfield, tells me that either they aren’t confident in his ability yet and/or they don’t want to deplete his trade value by having him struggle with the big club.

The Pirates have a serious opportunity to make a lot of noise in the N.L. Central and beyond this year.  Injuries and under-production have hurt the Cardinals and Milwaukee Brewers’ chances of seriously contending, at least at this point, and the Houston Astros and the Cubs are both bottom-dwellers in the division.  That leaves the Reds and the Pirates, and given the inconsistent play of Cincy, this is a great chance for the Bucs.  They have a considerably favorable schedule down the stretch, with 20 games remaining against the Astros and Cubs, and given the way they’ve played at PNC Park this season, things are falling in place for this team right now.

DON’T WASTE IT!  Get a starting pitcher.  Get a quality bat to put in the middle of the lineup.  Make the moves to WIN NOW.  Not next year.  Not in 2015.  NOW.  This team, this city, has been waiting for a winner since 1992…the wait could be over this year…make a move to put this team over the edge.

Be sure to check back here for our reactions to all the latest news surrounding the Pirates and the trade deadline from us, the Fans From The Stands!