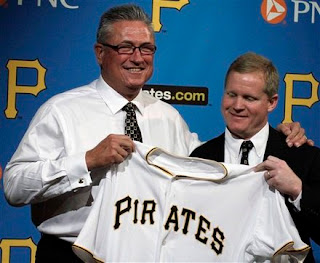 As most of Pittsburgh and the Major League Baseball community are aware by now, the Pittsburgh Pirates have hired a new manager. As of November 15, 2010, Clint Hurdle, who managed the Colorado Rockies to the 2007 pennant, was signed on to be the Buccos’ skipper, inking a 3-year deal which was formally announced on Monday at a news conference alongside owner Bob Nutting, president Frank Coonelly, and general manager Neal Huntington.

Naturally, the fan reaction to this signing hasn’t exactly been overwhelmingly positive. Can you blame them? After all, Pittsburgh fans have seen their fair share of championships in Pittsburgh on the ice and on the football field with the celebrated successes of the Penguins and Steelers. Unfortunately, that success hasn’t been existent on the baseball field in 18 seasons. While some have remained hopeful year after year, others have lost all confidence in the team’s commitment to return to the glory days. So what can Clint Hurdle do in Pittsburgh in his 3 year stint that predecessors Gene Lamont, Lloyd McClendon, Jim Tracy, and John Russell weren’t able to do?

First of all, Hurdle takes over a team who finished with 105 losses last season, the Pirates’ worst in 58 years. The team has finished under .500 for 18 consecutive seasons, and high turnover roster moves and low payrolls are as alarming as the horrible on-field results. Why should we feel optimistic that Hurdle can turn things around?

Well first of all, not only were the Pirates interviewing him for the position, but he was interviewing the team as well. While the Buccos were inquiring about his managerial style, Hurdle was questioning the team about their plans to turn around the franchise, and how they expect to turn this once proud franchise into a competing organization once again. This immediately sets him apart from his preceding managers, who appeared to be surprised and overjoyed to simply have the position, not to actually impact the team positively.

Along with the uplifting first impression of the Hurdle, the Pirates are also looking forward to seeing the continued progression of Andrew McCutchen, Pedro Alvarez, Neil Walker, and Jose Tabata. But the reality of the situation is that even despite the promise to aforementioned athletes, the Pirates were last in pitching, second from the bottom in hitting and tied for the major league lead in errors last season. In fact, the Pirates need to win 24 more games next season to finish at the .500 mark.

For the Pirates to turn things around over the next 3 years, it will, without a doubt, take a joint effort on the part of Huntington, Coonelly, Nutting, AND Hurdle. It is not fair for fans/critics/players/management/ownership to assume that all responsibility for winning (and losing) lies in the hands of the newly-hired Hurdle. It is up to the management/ownership to make the necessary additions to the roster, particularly the pitching staff. THEN it is in Hurdle’s back to put the right players on the field, teach them the necessary techniques to succeed, and inspire them to compete at a high level day after day.

In response to questions about the Pirates’ issues, Hurdle replied, “It’s like how do you eat an elephant? One bite at a time. We’re going to fix one thing at a time.”

While not exactly the most politically correct analogy, one has to appreciate the confidence, optimism, and past success, most prominently with the Rockies, leading them on a late season run into the World Series in 2007. For now, here’s to a new era for the Pirates, led by a man who the president, owner, and general manager believe in with confidence. Congratulations to Clint Hurdle, the newest manager of the Pittsburgh Pirates.