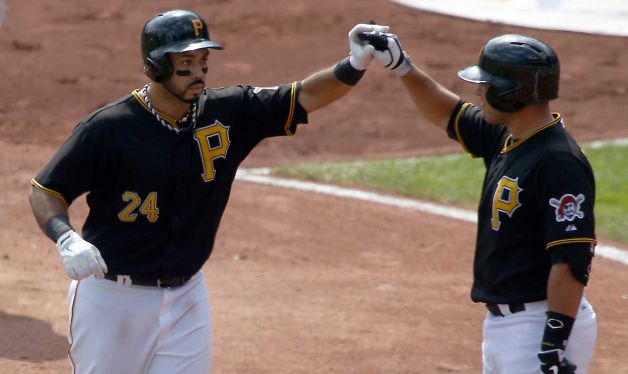 After losing their third straight game to the San Diego Padres last night, the Pittsburgh Pirates had caught the attention of baseball fans everywhere…but for all the wrong reasons.  Late last night, thoughts and comments of collapse were echoing around the Steel City.  But as the Pirates have done all season long, they responded to adversity, drubbing the Padres this afternoon, 10-1, to avoid the sweep at PNC Park.

Gerrit Cole won his 9th game of the season today, giving up one run on four hits with three walks and twelve strikeouts through six innings.  After giving up a run in the first inning, he was solid the rest of the day, whiffing Padres hitters at will.  Tony Watson, Jason Grilli, and Stolmy Pimentel combined to pitch three scoreless innings of relief.

But today, it was all about the offense….yes that same offense that had done virtually nothing up to this point in the series.  Neil Walker led the Bucs, going 4-5 with a homerun and 3 RBI’s, while Jose Tabata had two hits and three RBI’s of his own.  Pedro Alvarez hammered his 34th homerun of the season.  In fact, as ironic as it is, Andrew McCutchen was the only starter today to not tally a hit.

The Bucs broke things open in the fourth inning, when the game was tied 1-1.  After Alvarez put them in front with a solo homerun, the Pirates started collecting hits against San Diego starter Ian Kennedy.  Tabata’s two run double scored Tony Sanchez and Jordy Mercer.  Walker’s two-run homerun scored Tabata, and the Pirates had a 6-1 lead after four.

Tabata and Walker each added another RBI in the seventh, and Alvarez’s ground out in the eighth pushed the 10th run across to make it a laugher at PNC Park.

This was just the type of game the Pirates needed…a convincing, blowout win in which the offense, up and down the lineup, came alive.  They can now ease the panic of the fans for only a few hours, as the focus will now turn to this HUGE series this weekend against the Cincinnati Reds.  Tomorrow night at 7:05pm, all eyes will be on the Bucs and the Reds.