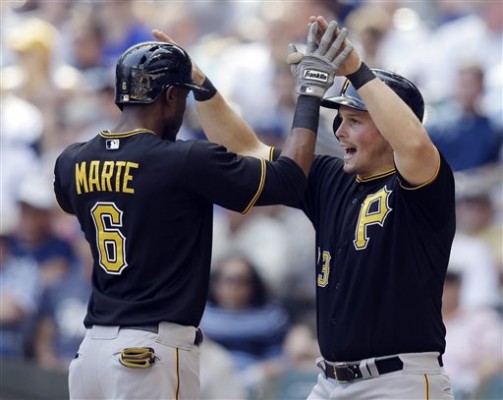 Just as was the case in the previous two games, the Pittsburgh Pirates trailed the Milwaukee Brewers for the majority of this afternoon’s game at Miller Park in the finale of the teams’ three game series.  But unlike the past two days, the Bucs were able to rally for late-inning runs, beating the Brewers 6-4.

Pedro Alvarez, Starling Marte, and Michael McKenry each homered for the Pirates, who avoided a sweep by the Brewers with the win today.  Pedro went 2-4 on the day with a homerun, a single, and two RBIs.  Marte’s homerun was part of a four-run eighth inning for Pittsburgh.

The Brewers took the lead in the first inning off Jeanmar Gomez, who was making his first start of the season for the Pirates.  Ryan Braun’s RBI single scored Jean Segura and Milwaukee was in front early, just as they had been virtually the entire series.

Alvarez’s homer in the second tied the game, but just two frames later, Carlos Gomez and Yuniesky Betancourt hit solo homeruns to put the Brew Crew back out in front at 3-1.  McKenry, who gave Russell Martin a day off, blasted a long ball to deep right center, cutting the lead to a single run.

After Milwaukee scored a run in the seventh, the Bucs took the lead for good in the eighth.  Marte’s two run homerun to deep center field scored Travis Snider, who got on base with a pinch-hit single.  Brandon Inge and Alvarez added RBI singles to stake the Pirates to a 6-4 advantage.  Mark Melancon and Jason Grilli shut the Brewers down in the eighth and ninth to clinch the victory.

Unlike the first two games of the series, the Pirates’ pitching staff did a nice job this afternoon.  Gomez pitched four innings, giving up three runs (two earned) on four hits, while Justin Wilson gave up just one run on one hit in his 2.1 innings of work.  Grilli earned his 11th save of the season.

This was a big game for the Pirates to win.  After a great beginning to the road trip against Philadelphia and St. Louis, the Bucs needed to win this game to salvage a winning record.  While they certainly haven’t solved the Brewers at Miller Park, they did salvage a game, and, after a day off tomorrow, will be fresh and ready to welcome the Washington Nationals to PNC Park.