Pirates Back In First After Defeating Cardinals 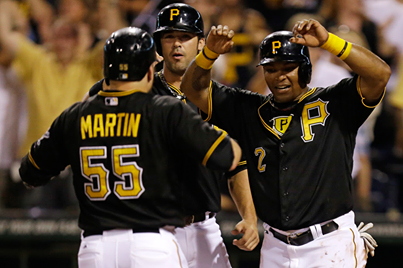 No folks you don’t have to pinch yourself, the calendar and MLB standings are correct.  It is September 1 and the Pittsburgh Pirates are leading the Central Division.  That is because of a 7-1 win tonight over the St. Louis Cardinals in front of the biggest crowd at PNC Park this season.

Before the game the Buccos made another trade splash as they got Justin Morneau from the Minnesota Twins for Alex Presley and a player to be named later or cash.  Morneau got to the ballpark half way through the game and saw quite a show.

A.J. Burnett was on the hill for Pittsburgh tonight, and while he has struggled at times in August, tonight he was the Burnett this team needs down the stretch.  He would last seven innings allowing one run on four hits, while striking out six and walking one.  The great thing was the he did not have any jams to work out of and the offense was able to give him the run support that he has missed out on throughout the year.  Vin Mazzaro came in for the final two innings and shut down the St. Louis offense.  He would only allow two hits with one strike out.

The offense was again running on all cylinders tonight.  The second inning is when the scoring began and surprisingly it was Burnett who got it started.  He would single into right for the first run.  That would allow Jose Tabata to follow up with a single of his own to right field and take a 2-0 lead.

The Cardinals would collect their only run in the top of the third when Carlos Beltran singled into right.  The Buccos would then explode for five runs of their own in the bottom part of the inning.  Marlon Byrd would single in Pedro Alvarez to begin the big inning.  Russell Martin would step to the plate with two runners on and launch a three run homer to center field for the second straight night.  Neil Walker would come up and hit an RBI triple to put the icing on the cake and the game for the Pittsburgh offense.

Like I said early, it’s September and the Pirates are playing meaningful baseball.  However, there is that feeling of greed that is in all of us that wants more than just 82 wins.  We want the division title.  The Buccos have a chance to take a step towards that goal tomorrow afternoon when this series wraps up.  They will send Kris Johnson to the mound for his first start in a Pittsburgh uniform.  He did pitch six innings of relief on August 18th against the Arizona Diamondbacks.  I just hope the offense can give him the support they have given Francisco Liriano and Burnett these past two nights.  Game time is 1:35pm.