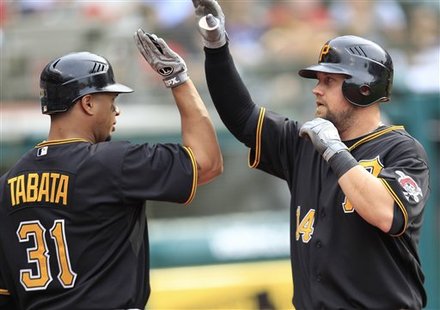 One of the challenges this year’s Pirates’ team has faced has been inconsistency.  Offensively, the team just can’t seem to get on track night after night.  In game one against the Cleveland Indians last night at Progressive Field, the Bucs couldn’t muster a single run, spoiling a great start by James McDonald and falling to the Tribe, 2-0

Today, on the other hand…the offense came alive, hitting four homeruns on their way to a 9-2 win over the Indians.

The Pirates’ offense scored four runs off Cleveland starter Ubaldo Jimenez, then scored five more runs against the Tribe’s bullpen on their way to a nine-run outburst.  Pedro Alvarez had two homeruns and three RBI’s, while Alex Presley added a solo shot and Casey McGehee hammered a two-run round-tripper.  McGehee led the offensive charge with four RBI’s, while Garrett Jones also added a run-scoring hit for the Bucs.  In all, they tallied 12 hits one day after not being able to score a single run.  It’s amazing how much a day can change things in the game of baseball.

Not to be overshadowed by the offense was A.J. Burnett, who earned his seventh victory of the season (and sixth in a row) after another solid performance this afternoon.  A.J. gave up just two runs on six hits through 6.2 innings.  He also walked four, struck out two batters, and gave up two homeruns.  Jared Hughes and Doug Slaten finished things up from the bullpen, refusing to allow the Indians to make a run at a comeback.

This was a much-needed victory for the Bucs today…not only to snap their losing streak, but to get back to the way they were playing before this road trip.  Today was the second straight game that the Bucs got a quality start from their pitcher, and while last night’s offensive performance was not up to par, the bats came alive today.

McGehee, Alvarez, Jones, and Andrew McCutchen had two hits each for the Pirates.  It’s incredible that the offense can come alive for one game a day after they were stagnant at best.  Hopefully, today’s game will be able to jump start this offense and they will continue to produce in the coming days, starting with tomorrow afternoon in the rubber match of the series against the Tribe.

The Pirates will send Brad Lincoln to the mound against Cleveland’s Jeanmar Gomez.  First pitch is scheduled for 1:05pm.