Pirates Battle Back For 5-4 Victory 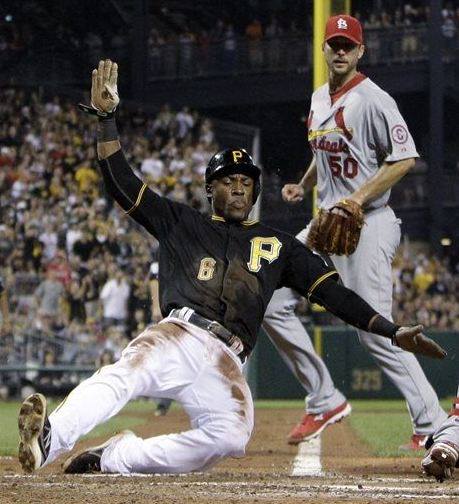 Tonight’s game between the Pittsburgh Pirates and St. Louis Cardinals felt like a heavyweight fight.  When one team landed a jab the other would counter with a hook.  In the end it was the Buccos who would deliver the knockout punch to cap their fourth straight victory 5-4.

After all the talk of Pittsburgh needing to make a trade for a bat, they held their ground and decided to move forward with the team that has led them to this point.  The offense was what stepped up in tonight’s victory.  After St. Louis scored two in the first, Pedro Alvarez would score their first run of the game with an RBI single to center.  The Cardinals countered in the third to go up 3-1.  The Buccos then got some instant offense from Neil Walker and his homer to right field.  However, the Cards would score again in the fourth, but like they had all night, the Buccos battled back to within one on a Clint Barmes double.

Pittsburgh would tie the game in the fifth when Andrew McCutchen hit a sac fly to centerfield.  The game remained tied for two innings.  That is when Russell Martin put the Pirates up for good in the eighth with an RBI single.

Jeff Locke started tonight, and it may have been his worst outing of the year.  St. Louis was able to collect ten hits off Locke during his four innings of work.  All four of the Cardinals runs would be charged to him, but he was able to collect six strikeouts to only one walk.

The Shark Tank picked him up with five strong innings of work.  Vin Mazzaro worked the fifth and sixth allowing one hit and one strikeout.  Tony Watson then worked the next two innings striking out three, while allowing two hits.  Watson was also able to pick up his third win of the season.  Mark Melancon then shut the door in the ninth for his fifth save of the year.

With tonight’s win the Pirates are 2.5 games up in the Central Division over the Cardinals and own the best record in baseball.  This five game series will wrap up tomorrow night, with Charlie Morton heading to the hill.  Game time is 7:05pm.