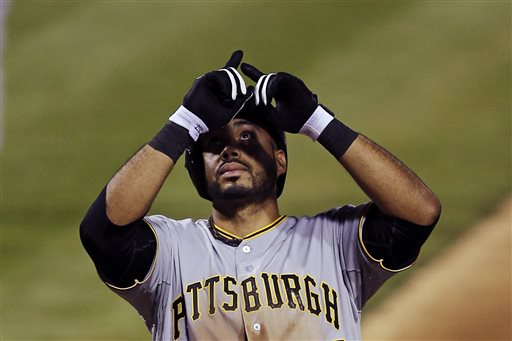 Winning on the road is never easy, especially when you are facing a two time Cy Young Award winner in Roy Halladay.  The key though is to limit mistakes and take advantage of opportunities handed to you by the other team.  That is exactly what the Pittsburgh Pirates did tonight in defeating the Philadelphia Phillies 5-3 at Citizens Bank Ballpark.

Early on this game looked like a good old fashion pitchers duel as Halladay and Wandy Rodriguez were preventing the other team from having a big inning.  Philadelphia’s first two runs came on solo home runs.  The first was by Chase Utley in the first inning, the second came in the fourth inning off the bat of Ryan Howard.  In the middle of that Pedro Alvarez would single home Garrett Jones to tie the game in the fourth inning.

The Phillies increased their lead to two in the sixth inning when pinch hitter Kevin Frandsen singled to center for an RBI.  That run would close the book on Rodriguez who lasted 5.2 innings allowing three runs on nine hits, while striking out five and walking two.  Not the best night for Wandy, but he kept his team in the game and shortened the night for the bullpen.

Halladay was even better tonight.  He would exit after six innings allowing one run on one hit.  He would strike out eight and walk two batters.  Doc did not look happy after being pinch hit for in the sixth and the Bucco offense would prove that to be a costly mistake.

In the seventh Pedro would strike again.  This time with a solo shot to right field that brought the Pirates within one run.  The eighth inning saw Pittsburgh tie the game up and then take the lead.  Travis Snider would single to bring home Jose Tabata.  Brandon Inge then came off the bench with the bases loaded to single in the go ahead run.  The Buccos added an insurance run in the ninth on a Marte triple that Utley could not handle in shallow right field.

The bullpen was lights out once again with Vin Mazzaro pitching 1.1 innings to earn his first win of the season.  That was followed by Mark Melancon pitching the eighth for hold number eight on the year.  Then of course it was time to fire up the grill in the ninth as Jason Grilli earned his ninth save of the year.

With tonight’s win Pittsburgh has earned at least a split in this series.  Of course they will be trying to win the series with a 1:05pm game tomorrow afternoon.  The pitching matchup will once again be difficult as James McDonald will face another Cy Young winner in Cliff Lee.