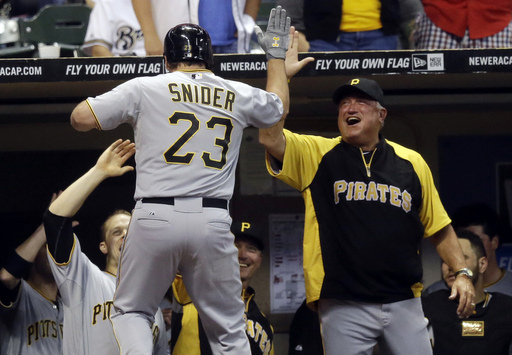 Who says Miller Park was a difficult place to play!?  The Pittsburgh Pirates scored a late run in the eighth inning, and the bullpen finished up an impressive start from Gerrit Cole, beating the Milwaukee Brewers, 4-3 in the second game of the series.

More importantly (for fans moreso than the players), the Pirates won their 81st game of the season….and we all know what that means.  It means that the streak is officially over.  The Pittsburgh Pirates will not have their 21st consecutive losing season in 2013.  While the team’s aspirations are much higher than simply ending the regular season with a winning record, this is another feat that the team, and the fans, will be able to look back on with pride after the season is over.

Things didn’t start out well for either starter, Yovani Gallardo or Gerrit Cole.  Andrew McCutchen’s solo homerun in the top of the first put the Bucs on top, but the Brewers answered with two runs of their own in the bottom of the opening frame.

The Pirates tied things up in the third inning with some two out magic.  Three consecutive base hits by McCutchen, Justin Morneau, and Marlon Byrd brought the Bucs’ second run of the game across the plate.

From that moment on, though, both pitchers settled down and held the offenses in check.  While both teams had minor chances to score in the middle innings, the Pirates got their best shot in the top of the eighth inning.  After McCutchen forced a one-out walk, Morneau’s single advanced him to third base.  With runners on first and third and one out, Byrd smacked an RBI double down the third base line, giving the Bucs a 3-2 lead.

Milwaukee answered back immediately in the bottom of the inning on an RBI single by Jean Segura, tying the game, 3-3.  Unfortunately for the Brew-Crew, it wouldn’t be tied for long.

Travis Snider hammered a leadoff solo homerun to left centerfield, giving the Pirates a 4-3 advantage.  Mark Melancon set the Brewers down in the ninth to end the game, clinching the victory.

Cutch is certainly picking up where he left off in August.  Tonight, he scored all three runs for the Bucs, adding a homerun, a single, and a walk.  His first inning homerun was the 100th of his career, making him the sixth player in team history to hit 100 homeruns and steal 100 bases.

It was also a huge night for the newest Bucco acquisitions.  Morneau went 3-3 on the night, while Byrd added two hits and two RBIs.

Further, the Pirates extended their lead in the N.L. Central to two games, as the St. Louis Cardinals fell to the Cincinnati Reds at Great American Ballpark.  It was a good night all around to be a Pirates fan.

The Pirates and Brewers will wrap up their three game series tomorrow night at Miller Park, with the first pitch scheduled for 8:10pm.