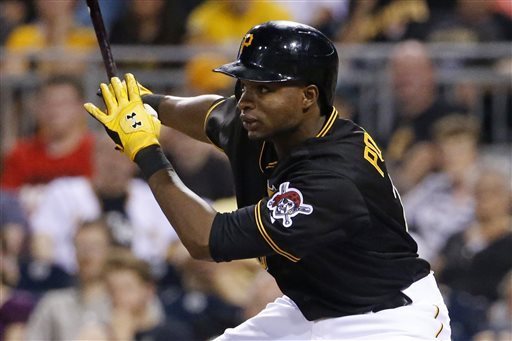 It had been a disappointing one-series home stand for the Pittsburgh Pirates entering this afternoon’s game against the Cincinnati Reds.  Like much of the N.L. Central, aside from the Chicago Cubs, the Reds have had the Bucs’ number this year, and had put themselves in position for a series sweep at PNC Park.

But today, Jeff Locke and the Pirates were just a little better than Homer Bailey and the Reds, as the Pirates used a bases loaded walk to salvage this afternoon’s game, 4-3.

Locke pitched a solid game for Pittsburgh, giving up two runs on three hits with one walk and two strikeouts in six innings of work.  He has been put in the starting pitching rotation due to injuries to Gerrit Cole and Francisco Liriano, and he has taken full advantage of it and has shown glimpses of his first half from a year ago.  Tony Watson and Mark Melancon each pitched a scoreless inning of relief, setting the table for Jason Grilli to promptly blow the save, giving up a solo homerun in the ninth inning.

The Reds took the lead in the first inning, thanks to a big hit and some solid base-running.  Billy Hamilton led off the game with a double off of Locke.  He then stole third, and, eventually scored on a sacrifice fly by Joey Votto.  They added another run in the fourth via the sacrifice as well.  Votto led off the inning with a double, advanced to third on a Brandon Phillips fly ball, and scored on Jay Bruce’s sacrifice fly.

The Pirates had a good opportunity to score on Bailey in the fourth inning.  Gregory Polanco set the Pirates rookie record by hitting safely in his first 9 games with his leadoff single.  Later in the inning, Gaby Sanchez singled, putting runners at first and third with two outs.  Unfortunately, the Bucs couldn’t capitalize, as Josh Harrison struck out swinging to end the inning.

Clint Barmes and Chris Stewart hit back-to-back one-out singles for Locke, who bounced into a fielder’s choice.  Barmes scored on a balk, which also moved Locke to second base with two outs for Polanco.  The Bucs’ right fielder reached base on a dribbler back to the pitcher, putting two runners on for Starling Marte, who singled home Locke, tying the game.  Andrew McCutchen’s single scored Polanco, and the Bucs had a 3-2 lead after five innings.

The game was delayed with two outs in the bottom of the sixth inning, with Polanco at the plate and bases loaded.  Pedro Alvarez led off with a double, and after a single by Stewart and Locke drew a walk, the skies opened up and play was halted.  When play resumed, Sam LeCure induced Polanco to hit into a fielder’s choice, ending the inning and keeping the Reds within a run.

Cincinnati tied the game in the top of the ninth on a solo homerun by Devin Mesoraco off Grilli.  The Bucs had a chance to win the game in the bottom of the inning, but with two on and two outs, Aroldis Champman struck out McCutchen to end the threat.

Gaby Sanchez singled with one out in the 12th, advanced to second on a balk, and moved to third when Clint Barmes was hit by a pitch.  Russell Martin then came to the plate with the bases loaded and two outs.  Cincinnati starter-turned-reliever Tony Cingrani walked Martin on five pitches, forcing Sanchez to score the winning run.

This was a huge win for the Pirates.  To wrap up this short three-game home stand with a victory is a big momentum-boost as they head out on the road this weekend.  While the offensive effectiveness of Polanco, Marte, and Cutch is exciting, the key to the rest of this week, and the entire season, will be the starting pitching and bullpen.

The Bucs will kick off a four game weekend series against the Cubs beginning tomorrow afternoon.