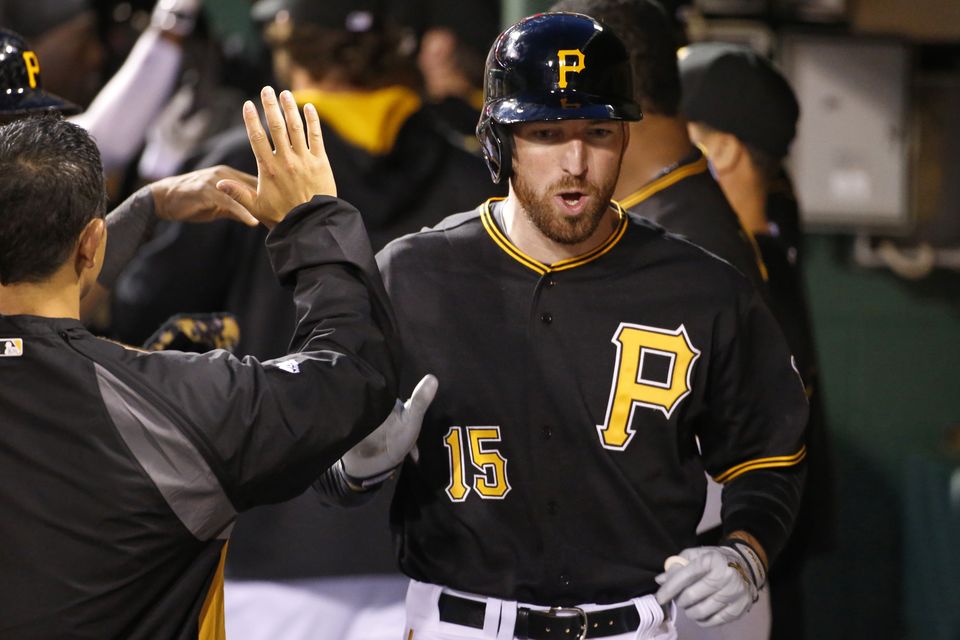 The Pittsburgh Pirates and Cincinnati Reds played a highly competitive and entertaining game tonight at PNC Park.  While a couple home runs made the biggest headlines for the Pirates, the end result came down to plays at the plate.  Fortunately for Pittsburgh, the ball bounced in their favor on the final play of the game, as the Bucs rallied late to take a 6-5 victory from the Reds in the first game of the series.

The Reds got on the board in the opening inning.  After being hit by the first pitch of the game, Billy Hamilton advanced from first to third on a ground out by Joey Votto, and scored on a ground ball hit by Brandon Phillips.  Pedro Alvarez made the play on the grounder, throwing it to home, beating Hamilton.  Unfortunately, Russell Martin couldn’t hold onto the ball, and the Reds took the early 1-0 lead.

Phillips and Todd Frazier connected on back to back doubles in the third inning to double their lead at 2-0.  But the lead didn’t last for long.  In the bottom of the fourth, Andrew McCutchen led off with a single.  After an Alvarez double and a Neil Walker walk, Ike Davis stepped to the plate and crushed a homerun to deep right field.  The grand slam was his first homerun as a Pirate, and it put the Bucs in front, 4-2.

After getting within a run in the seventh inning on a sacrifice fly by Hamilton, the Reds took the lead in the eighth by scoring two more runs.  Jay Bruce’s double to left scored Phillips, and Devin Mesoraco’s single scored Frazier. On that same play, and what turned out to be a huge play, Bruce was thrown out at home trying to score.  As it was, the Pirates got out of the eighth inning without any more damage, keeping it a one-run game.

McCutchen’s leadoff solo homerun in the eighth tied the game, 5-5, and after retiring the Reds in the ninth, the Bucs had a chance to keep this game from going into extra frames.

Martin and McCutchen both walked with one out to put runners on first and second in the ninth.  With two outs and two runners on, Walker hit a bloop single over Phillips head.  The throw came in and would have easily beaten Martin who was trying to score….but Mesoraco couldn’t handle the throw.

This was another wild game between the Pirates and Reds.  Entering tonight’s game, it was an enticing pitching matchup, pitting Mike Leake against Francisco Liriano.  However, both pitchers struggled tonight, each giving up their fair share of runs.  Liriano gave up a total of five runs (four earned) on seven hits through seven innings, while Leake gave up four runs on eight hits, including the grand slam to Davis, through seven innings.  Neither pitcher earned a decision.  Justin Wilson and Jared Hughes each pitched a scoreless inning of relief.

The Pirates have been reeling as of late, and tonight was almost another loss.  It was great to see Cutch have a strong game at the plate.  As for Liriano, after a tough start, he settled in and pitched well.  The seventh inning certainly didn’t go his way, and his final stat line shows that.  But he kept his team in contention down the stretch.

Game two of the four game series is scheduled for a 7:05pm first pitch tomorrow evening.  Edinson Volquez makes the start for Pittsburgh against the Reds’ Johnny Cueto.