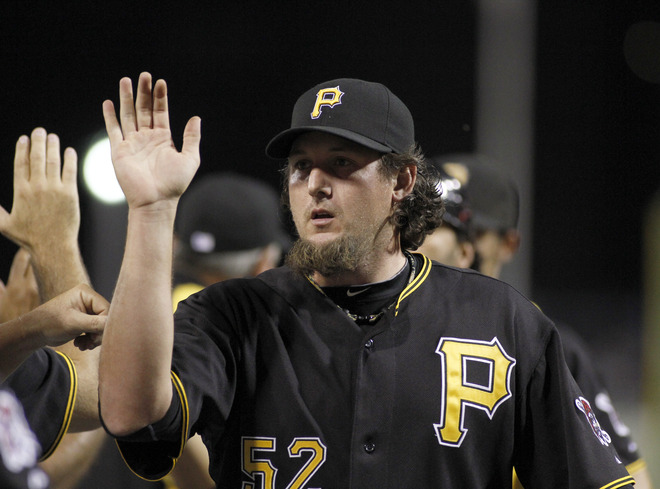 Don’t look now, but the Pittsburgh Pirates are playing really good baseball.  Following their 4-2 victory tonight over the Kansas City Royals at PNC Park, the Bucs are three games over .500 and continue to put pressure on the N.L. Central division leading Cincinnati Reds.

Erik Bedard won his fourth game of the season tonight, giving up two runs on five hits through seven innings.  While his performance tonight didn’t have all the glitter and glamour of some of the other pitchers on the staff at times, he was solid this evening, keeping the Royals’ hitters in check, as well as being able to work his way out of a few jams.  Jason Grilli and Joel Hanrahan came in and finished off things off in order in the eighth and ninth innings.  “The Hammer” earned his 16th save of the season with a 1-2-3 ninth inning in front of a sold-out PNC Park crowd.

While they did only score four runs tonight, the offense was effective, building an early lead and keeping the Royals at a safe distance throughout.  Neil Walker led the way with three hits, bumping his average up to .279 for the season.  The move to the second spot in the batting order has clearly done wonders for him.  Jose Tabata added two more hits, and the number six spot in the order looks very comfortable for him.  Garrett Jones and Clint Barmes each added an RBI for the Pirates, while Walker also drove a run across.

This was a huge win for the Pirates over a team that, on paper, is inferior to them. Pittsburgh looked like the better team on the field as well, taking the first game of this three-game set and putting themselves in prime position to win their fifth consecutive series.  Things are beginning to look pretty positive around the ballpark as more fans begin to see signs of a winning team.

The Bucs look to clinch a series victory tomorrow night as the two face off at PNC Park.  James McDonald will be on the mound for Pittsburgh against the Royals’ Vin Mazzaro.