Pirates Beat Up In 6-4 Loss To Rockies 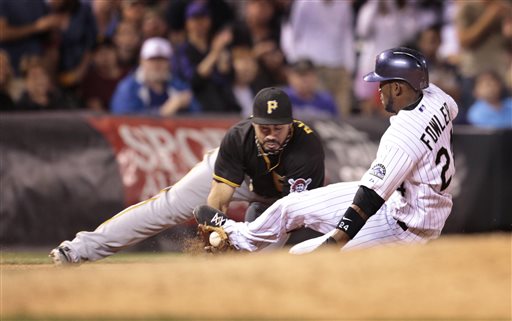 The Rockies used a five-run sixth inning to distance themselves from Bucs, beating the N.L. Central division leaders, 6-4, at Coors Field.

A.J. Burnett made the start for the Pirates, and didn’t have his best stuff, falling to the Coors Field curse.  The Bucs’ right hander gave up six runs (five earned) on eight hits in 5.2 innings.  Burnett was able to avoid problems until the sixth inning, when things came unglued for him.  With the loss, A.J. fell to 5-8 on the season.

The Pirates tied the game in the fourth inning.  After Andrew McCutchen led off with a walk, Russell Martin belted a one-out double, scoring Cutch and bringing the game even at 1-1.

Some two-out magic in the sixth inning gave the Bucs the lead.  Martin smacked a two-out single, and scored on a huge triple by Garrett Jones.  Jose Tabata beat out an infield ground ball, allowing Jones to score from third, and the Pirates had a quick two-run lead.

Unfortunately, the lead didn’t last for long.  The Rockies scored five runs in the bottom of the sixth, chasing Burnett from the game.  The Bucs trailed 6-3 heading into the seventh.

Josh Harrison led off the inning with a bunt single, and Starling Marte was hit by a pitch in the left wrist.  Marte left the game.  But after Neil Walker grounded out into a very questionable double play, McCutchen grounded out to the pitcher to end the threat.

Pittsburgh made things interesting in the ninth inning.  Gaby Sanchez led off with a walk, and Alex Presley hit a one-out single to put runners on first and third for Walker.  The Bucs’ second baseman singled home Sanchez, putting runners on first and second for Mr. McCutchen in a two-run game.  But Rex Brothers struck out Cutch and Pedro Alvarez to end the game.

In addition to the loss tonight, the Pirates had a number of worries from a health standpoint.  Alvarez injured his hand, while Marte hurt his wrist.  Starling’s injury initially looked to be severe, but later it was revealed that it was only a contusion and is listed as day-to-day.

The Pirates have had a rough start to this road trip.  With a difficult trip to St. Louis later this week, the Bucs need to put together a win tomorrow afternoon to avoid a series sweep against the Rockies.