Pirates Begin Second Half With Victory Over Mets 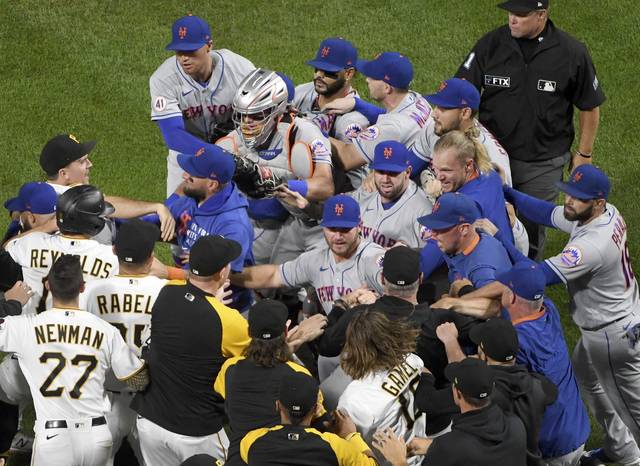 After four days away from the diamond, the Pittsburgh Pirates and New York Mets were back on the field Friday night to begin a three-game series at PNC Park.  Game one of this series featured a rain delay, cleared benches, and a pair of home runs, as Pittsburgh came away with a 4-1 victory.

This game was scoreless when the sky opened up and the tarp was pulled onto the field.  Once the game resumed the Pirates got to work to grab an early 2-0 lead.  With the bases loaded, Adam Frazier drove in those two runs with a single to left.  Those would be the only runs that New York starter Marcus Stroman would allow during his five innings on the mound.  He would also give up eight hits, while striking out three.

The Mets lone run came in the fourth when a ground out by Jonathan Villar allowed Pete Alonso to cross the plate.  That run was not charged to starter Chad Kuhl.  Kuhl would throw five innings tonight giving up two hits, while striking out three and walking five.  The five walks are high, but he would battle all night to keep the New York run total to a minimum.

After the final out was recorded in the bottom of the fifth the benches would clear after Stroman and Pittsburgh first baseman John Nogowski got into a shouting match.  Neither player was ejected, which was the right call in this matter.

The Pirates would use the long ball in the sixth and seventh innings to increase their lead.  Wilmer Difo would hit a solo home run 401 ft. in the sixth, while Bryan Reynolds would go yard with a 428 ft. solo shot in the seventh.  Now it would be up to the bullpen to maintain this lead.

The sixth inning belonged to Chasen Shreve and Chris Stratton.  Shreve would allow one hit, a walk, and pick up a strikeout, while Stratton would collect the final out of the inning.  Austin Davis struck out one batter during his inning of work in the seventh.  That would allow David Bednar to work a scoreless eighth where he would strikeout and walk one batter.  Richard Rodriguez then earned his 13th save of the season after walking and striking out a batter in the ninth.

After splitting their series prior to the All-Star break, it was nice to see Pittsburgh start of this series with a win.  The Pirates will now look for a series win tomorrow night when they send Austin Crowe to the mound.  Crowe did not have a great first half of the season sporting a 6.05 ERA, here is to hoping he comes back rejuvenated after the extended time away from the field.  First pitch is 7:05pm.