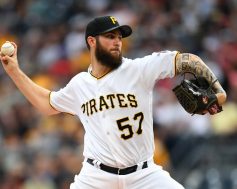 The Pittsburgh Pirates and Detroit Tigers began their annual interleague series tonight at PNC Park.  Pittsburgh has had more downs than ups when it comes to playing the American League this year, but Detroit has not been playing up to par either.  This four-game series would be another chance for the Pirates to keep pace for a potential playoff spot.

Trevor Williams had a fantastic start tonight for the Buccos.  He would throw seven shutout innings, while striking out five, walking two, and allowing only one hit.  Williams has been impressive for much of the season and could be earning a spot in the rotation for years to come.  His mound opponent Jordan Zimmermann was good too.  Zimmermann pitched seven innings allowing three runs on five hits with three walks and two strikeouts.

The difference was that Pittsburgh had a few shots of offense to go with that strong pitching.  Francisco Cervelli would get things started with a two out RBI double in the second that scored Gregory Polanco.  It would be another five innings before the Pirates would find the scoreboard again.  In the seventh inning John Jaso would smack a two-run pinch hit homer to right.  Jaso seems to have a knack for hits off the bench this year.

Newly acquired relief pitcher George Kontos made his Bucco debut tonight and looked very good.  He would pitch the eighth inning and strikeout one batter, while not giving up a hit or run.  Juan Nicasio would pitch the ninth inning, striking out two batters, while picking up his second save of the season.  It would be a great sign if the bullpen continues to be strong for the rest of the season.

Pittsburgh has now won four of their last five games and are at least keeping things interesting here in August.  These two teams will matchup at PNC Park again tomorrow night, before heading to Comerica Park on Wednesday for the final two games of the series.  Chad Kuhl will look to have another strong game and keep lowering his ERA, when he takes on Matthew Boyd.  First pitch is set for 7:05pm.