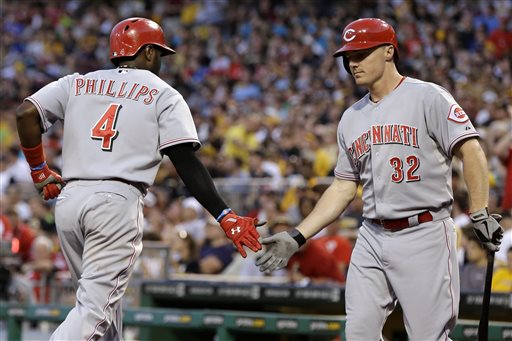 There has been some excitement building about the Pittsburgh Pirates lately, and tonight was a reminder that there is plenty of baseball left to be played.  The Cincinnati Reds got a great pitching performance by Johnny Cueto and some solid offense.

Cincinnati used the long ball to collect their first two runs of the night.  Jay Bruce would homer to right center field in the fourth.  That would be followed up in the sixth on a solo shot by Brandon Phillips.  Cueto only needed one of those runs, as he would pitch eight innings allowing one hit, while striking out six and walking one batter.

The only Pittsburgh batter to collect a hit tonight was Brandon Inge and that would come in the fifth inning.  Cueto is known for giving the Pirates fits, but tonight may have been the worst this offense has ever done against him.

The Buccos bullpen which for the most part has been solid this year was touched up a bit tonight.  Mike Zagurski could not get past his second inning of work, as he gave up four runs on three hits, while walking four batters in 1.2 innings of work.  Bryan Morris collected the final out of the ninth, but the damage had been done as the Reds would win 6-0.

Tough start to an important early season series, but the Pirates have been able to bounce back from series opening losses for the most part this season.  Game two will be at 7:15pm tomorrow and will feature Francisco Liriano and Mike Leake in the pitching matchup.