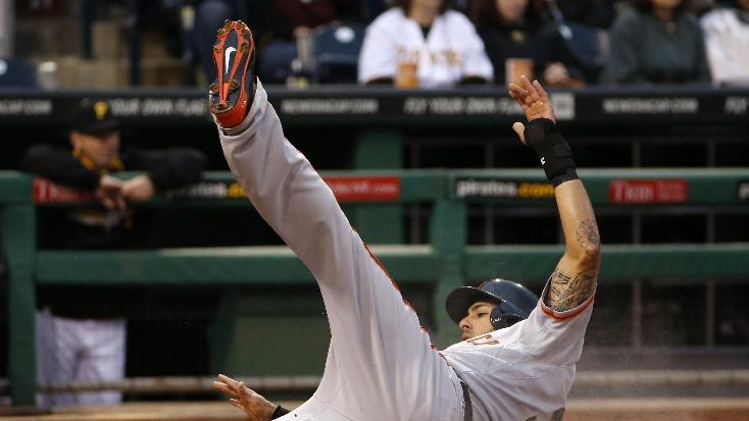 The Pittsburgh Pirates had been making a habit of winning wild games on this home stand.  After taking two of three games against the Toronto Blue Jays this past weekend, the Bucs faced the San Francisco Giants in the first of a three game set at PNC Park.  Tonight also marked the season debut for Jeff Locke, who was looking to return to the form of the first half of 2013, when he pitched well enough to become an N.L. All Star.

Locke gave up six runs on eight hits through 5.1 innings of work, while the Bucs’ bullpen gave up four more runs, and after a back and forth game, featuring 21 runs and 36 hits, the Giants pulled out an 11-10 victory.

The Giants scored two runs in the top of the 1st off Locke.  Michael Morse laced an RBI double down the third base line, scoring Buster Posey from first.  Hector Sanchez followed that up with an RBI single, and it looked as if the rout could be on early.

The Bucs added some insurance in the fifth inning on a bloop single by Alvarez, scoring McCutchen, who had reached base with a one-out double.  Starling Marte hit a double off the wall, and Ike Davis was intentionally walked, loading the bases with one out for Tony Sanchez.  A wild pitch allowed Pedro to score, and after Sanchez was walked, a wild pitch to Clint Barmes allowed Marte to score.  Barmes’ sac fly scored Davis, increasing the lead to 8-2.

Posey’s RBI single scored Angel Pagan, and later, Sanchez singled home Hunter Pence, cutting the Pirates’ lead to 8-4, also ending Locke’s evening.  Bryan Morris was faced with the challenge of a bases loaded situation and only one out in the sixth inning.  Brandon Hicks then lined a double down the third base line, cutting the lead to 8-6.  The Giants added a sacrifice fly and, all of a sudden, it was an 8-7 game.

Pittsburgh answered again with an RBI ground out in the bottom of the sixth, allowing Harrison to score from third.  But that didn’t last long, as the Giants scored a run right back on an RBI double by Morse and an RBI single by Sanchez, tying the game.

Jose Tabata’s pinch hit RBI infield single scored Davis, who reached on a walk earlier, to put the Bucs back on top, 10-9.

Pence led off the top of the ninth with a single off Mark Melancon, advanced to second base on a wild pitch, and scored on an RBI single by Posey.

The Giants scored a run in the top of the 13th inning on a sacrifice bunt by Jean Machi, who laid down a perfect bunt.  Jared Hughes fielded the bunt and threw it past first baseman Davis, allowing Pence to score from third base.  Pittsburgh had a chance to tie the game, or more, when Walker was hit by a pitch to lead off the bottom of the 13th, but Alvarez grounded into a game ending double play.

This is just one of those games that makes you sick to watch as a fan.  The Bucs had an 8-2 lead after five innings, and somehow let the Giants get closer and closer, until the game was tied.  They also suffered another blown save.

After this marathon of a game, the Pirates and Giants will face off once again tomorrow night in the second game of the series.  First pitch is scheduled for 7:05pm.