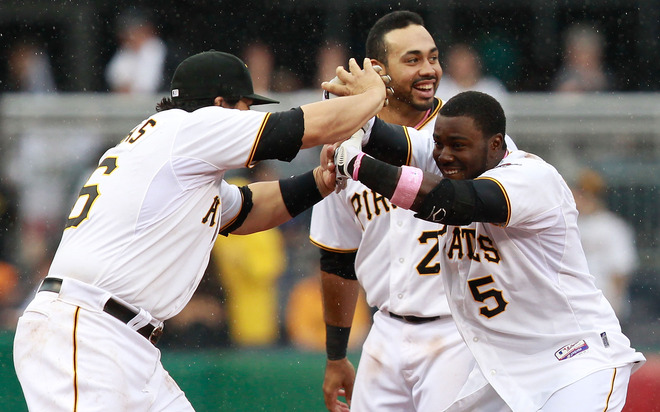 Mother Nature tried to dampen Pittsburgh Pirates fans spirits with a steady rain all afternoon, but a Josh Harrison walk off single in the 12th sent this Mother’s Day crowd home happy as the Pirates defeated the Houston Astros 3-2.

The Buccos received another great starting pitching performance today, this time by A.J. Burnett.  Burnett kept his team in the ballgame throughout his eight innings of work.  By the time he left the game he would strike out four and give up two runs on six hits.  Houston collected one of their runs in the fifth on a Jason Castro RBI single and in the seventh when Chris Johnson would single home a run.

Wandy Rodriguez was just as effective for the Astros.  He would also go eight innings allowing one run on three hits with seven K’s and one walk.  Wandy would get into some trouble in the first, when Andrew McCutchen continued his hot streak with a RBI double.

It would then come down to the bullpens and today the upperhand went to the Buccos.  Houstonbrought in closer Brett Myers to close out the game, but Pittsburghwould get to him for a run on a Pedro Alvarez sacrifice fly.

The Pittsburghbullpen used a total of four pitchers to cover the final four innings.  Jason Grilli, Joel Hanrahan, Juan Cruz and Tony Watson each went an inning of not allowing a run.  It would be in the bottom part of the 12th inning that Harrison brought in Clint Barmes for the game winning run.

Great to see the Pirates win another series and finish up the home stand with a winning record.  They will be back on the road tomorrow for the first of seven away fromPNCPark.  Tomorrow’s game will take them toMiamito take on the Marlins in their new ball park.  First pitch is scheduled for 7:10.