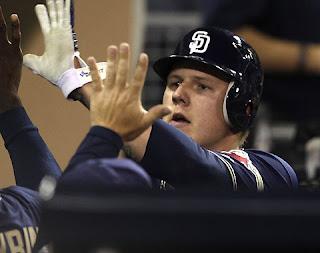 The Pirates entered tonight’s game at with the opportunity to achieve something last year’s club was unable to do.  With a victory against the Padres tonight, the Bucs would be ensured their fifth road series win of the season, which would surpass last year’s mark of four.  This would also bring the Pirates to that elusive .500 record, something that has been the focus of Pirates’ fans, players, and the rest of Major League Baseball for nearly the past 20 seasons.
Jeff Karstens made the start for the Bucs in place of the injured Ross Ohlendorf once again.  Hailing from , Karstens certainly wanted to have a great performance in front of his hometown.
The Pirates once again got off to a great start tonight, as they scored first in the game for their eighth consecutive game.  Neil Walker crushed a double to deep center field, scoring Andrew McCutchen and Xavier Paul to give the Bucs an early 2-0 lead.
Unfortunately, despite the early run support, things didn’t turn out quite the way Karstens, or the Pirates, would have wanted.  After a solid first couple of innings, Jeff ran into trouble in the third frame.  Mat Latos, his mound opponent, hammered a solo homerun, which was followed up by another solo shot by Eric Patterson.  After a Ryan Ludwick double, Cameron Maybin smacked an RBI single, capping the Padres’ three-run inning.
After the getting through the fourth relatively easily, Karstens was pulled in the fifth inning, leaving two on and no outs for reliever Daniel McCutchen.  Fortunately for the Buccos, McCutchen was able to get out of the inning without allowing a run to cross the plate.
The Pirates responded in the seventh inning for three runs.  With runners on first and third and one out, Matt Diaz hammered a pinch-hit double to right center, scoring Chris Snyder to tie the game.  The very next batter, McCutchen, hammered a two-run single straight up the middle to give the Pirates a 5-3 lead.
This advantage didn’t last long for , as the Padres responded immediately in the bottom half of the inning for two runs of their own.  After two consecutive balls directed toward Ronny Cedeno resulted in hits, followed by a bunt single, the Padres had the bases loaded with no outs.  After Joe Beimel walked in a run to cut the lead to 5-4, he then forced a double play ball around the horn, which allowed another run to score.  When the seventh ended, the Padres and Pirates were tied.
In the bottom of the eighth, broke the tie as Rob Johnson crushed a Joe Beimel fastball over the fence to give the Padres a 6-5 advantage.  On a bright note, Daniel Moskos came in and forced a groundball double play to end the Padres’ threat in the eighth.
Heath Bell came in and earned his 41st consecutive save for the Padres in the ninth.  After Brandon Wood drew a walk to lead off the inning, he advanced to second on Cedeno’s sacrifice bunt.  With one out and Ryan Doumit at the plate, ’s pitch took a dive in the dirt, giving Wood an opportunity to advance to third.  Johnson made a perfect throw over to third, Chase Headley made the tag, and Wood was called out.  Doumit struck out a few pitches later, and the Padres won the game, 6-5.
This was a tough loss for the Pirates tonight.  It was a back and forth type game from start to finish, and the Padres had the knockout punch in the form of Johnson’s homerun.  Karstens certainly didn’t have his best start, but he can’t necessarily be blamed for the loss.  This is one of those games in which there isn’t a definite reason why we came up short.
The bullpen gave up three runs tonight, something that we, Pirates’ fans, aren’t used to seeing this season thus far.  Mike Crotta, in particular, had a rough outing, and of course, Beimel gave up the big one to Johnson.
Even more frustrating, however, was Ronny Cedeno.  He had an average evening at the plate, with a hit as well as a sacrifice, but his fielding was especially shameful.  He made another unsuccessful attempt at a bare-handed pick and throw for the second consecutive game, and the back-to-back balls hit to him in the seventh inning proved to be monumental.  He is a Major League shortstop (or is he?); at least one of those plays needs to be made.  Neither one was made, and the Padres ended up scored two runs.
This sets up yet another rubber match for the Pirates…this time, tomorrow at 6:30 as they close out their west-coast road trip.  Kevin Correia will get the start for the Pirates, facing off against the Padres’ Clayton Richard.
Record Vs. Padres:  1-1
Record Vs. N.L. West: 5-7
Record On The Road: 10-8
Overall Record: 14-16
And…
As Always…
Let’s Go Bucs!