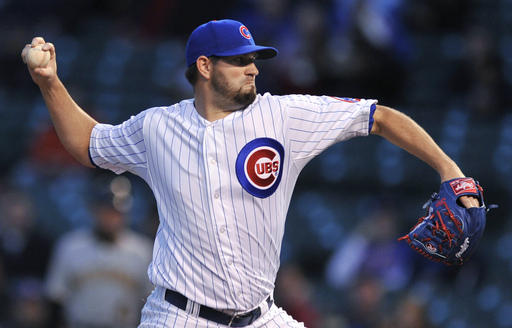 When the wind is blowing out at Wrigley Field, one must be ready for an offensive game.  That was exactly what happened tonight as the Pittsburgh Pirates fell to the Chicago Cubs 7-5.  The long ball was in full effect, as these two teams combined for seven home runs.  Chicago picked up the win because they were able to string hits together when not going deep.

Wandy Rodriguez started for Pittsburgh and for the second straight game he had moments where lapses hurt his final stat line.  After giving up a run in the first he settled in until the fifth inning when the Cubs tagged him for three more runs.  He was lifted after five innings allowing four runs on nine hits while striking out six and walking three.

Jason Hammel was effective again against the Pirates.  He lasted seven innings giving up three runs on three hits, all of which were home runs.  Pedro Alvarez hit his first of two tonight in the fifth inning to tie the game 1-1.  Travis Snider and Russell Martin would hit the other two off Hammel in the seventh inning.

The Bucco bullpen was roughed up too tonight. Jeanmar Gomez pitched the sixth and seventh, and was hit up for three runs on four hits, with one walk and one strikeout.  Justin Wilson finished the night in the eighth with one hit and one K.

Pittsburgh tried to make a comeback in the ninth, but solo dingers by Alvarez and Martin were not enough to close the gap.  Overall this is a throw away game.  Five of the Pirates six hits were home runs, but with the Cubs being able to collect fourteen hits, those solo shots were not enough.  Hopefully Wandy can be more efficient in his next start, which will not be against Chicago.

This series will wrap up tomorrow afternoon with Gerrit Cole taking on Travis Wood.  With a win, the Buccos will have won three straight series to start the 2014 campaign.