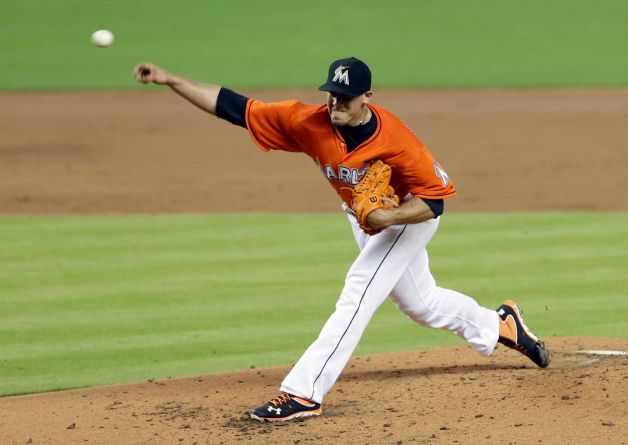 This afternoon’s game between the Pittsburgh Pirates and Miami Marlins featured two promising young aces on the mound – Gerrit Cole and Jose Fernandez.  While both pitchers did their part to stifle the opposing offense, Fernandez was better on this day…setting a team rookie record with 13 strikeouts as the Marlins beat the Bucs, 3-2.

Fernandez improved to 7-5 on the season, while Cole fell to 5-4 with the loss.  Giancarlo Stanton led the Marlins offensively, going 2-3 including the game-winning homerun in the sixth inning.  As a team, the Pirates managed just four total hits, two of which came off the bat of Russell Martin.

After a pedestrian first inning, the Pirates go things going offensively in the second.  Pedro Alvarez led off with a pinch-hit single, and scored on Martin’s RBI double on the very next pitch.  Later in the inning, Clint Barmes smacked a first-pitch single to centerfield, scoring Martin.

Stanton forced a one out walk, and Logan Morrison smacked a single to put runners on first and second base.  Lucas chipped a base hit just past first base to push Stanton across the plate, cutting the Pirates’ lead in half.  Donovan Solano followed with a sacrifice fly to center field, scoring Morrison and tying the game, 2-2.

Stanton crushed a solo homerun to center field in the sixth inning to give the Marlins their first lead of the game.  The Pirates tried to rally back in the seventh inning, as Martin led off with a single to left.  But Garrett Jones struck out and Gaby Sanchez grounded into a double play to end the inning.

Equally as depressing was the ninth inning, which started relatively promising.  Neil Walker singled with one out, and two batters later, Martin drew a walk to put two runners on with Jones coming to the plate.  But unfortunately, G.I. grounded out weakly to second base to end the threat, and the game.

This was certainly not the weekend series we, as Pirates fans, were expecting in Miami.  The Marlins have struggled throughout the entire season, and being one of the best teams in all of baseball, the Pirates should have taken at least two games this weekend.  The offense struggled on Friday and today, and will need to produce more consistently in the Bucs’ upcoming home stand, beginning tomorrow night with a HUGE five-game series against the St. Louis Cardinals.