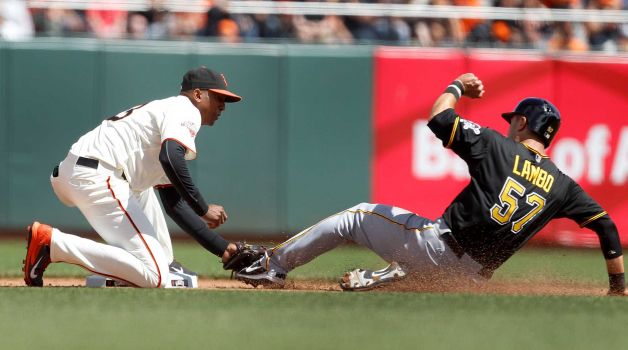 The Pittsburgh Pirates couldn’t have asked for a better start to this west coast road trip.  After taking two of three from the San Diego Padres, they won the first pair of games against the San Francisco Giants in dominating fashion.  But after a 6-3 loss last night, the woes continued this afternoon for the Bucs, who fell once again to the Giants, 4-0, at AT&T Park.

Today, the opposition was former Bucco pitcher Ryan Vogelsong, who turned in his best start of the season.  He won his third game of the season, pitching eight scoreless innings, giving up only two hits, retiring the Pirates hitters at will throughout the day.

A.J. Burnett took the hill for the Bucs this afternoon, falling to 6-9 on season.  He pitched deep into the game, but made just a few mistakes that were the difference in the game.  Giving up four runs on eight hits through 7.1 innings, the Giants offense did more than enough to earn a decisive victory.

Pablo Sandoval led the Giants with two hits and two RBIs, while the Pirates, as a team, managed just three total hits.  Andrew McCutchen, Andrew Lambo, and Felix Pie each had a hit, but overall, the offense was abscent.

Luckily for the Pirates, both the Cincinnati Reds and St. Louis Cardinals lost this afternoon.  The Bucs remain tied atop the N.L. Central division with the Cards, as they return home to Pittsburgh for a three game series against the Milwaukee Brewers this week after a day off tomorrow.